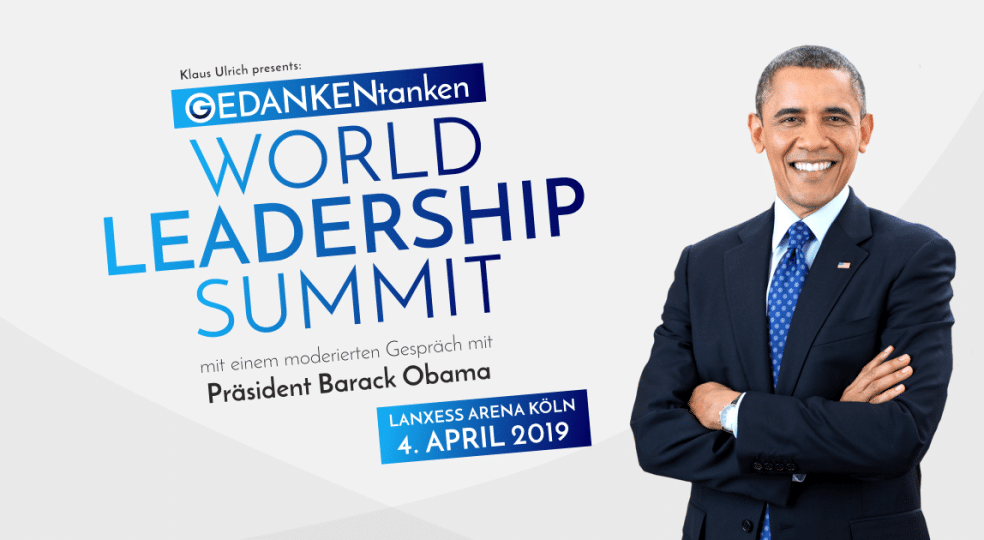 On April 4, the 44th President of the United States will attend the GEDANKENtanken World Leadership Summit at the LANXESS arena.

Cologne, March 8, 2019 - Can individuals change the world? What can humanity be? And: Who shows the way in times of change? Questions like these are the focus of the World Leadership Summit on April 4, 2019: Visionaries and decision-makers will take a look at our common future in the LANXESS arena. The highlights of this extraordinary event include a moderated conversation with President Barack Obama.

The World Leadership Summit on April 4, 2019 is a public event hosted by organizer
Klaus Ulrich in cooperation with GEDANKENtanken. The presale starts on Friday, March at 9:00 a.m. exclusively at www.eventim.de. From Monday, 11 March at 10:00 am tickets are available at the usual ticket agencies.

The Cologne-based company GEDANKENtanken, founded in 2012 and led by the owners Dr. Stefan Frädrich and Alexander Müller, has been organizing leadership trainings and speaker nights on a wide variety of topics since 2012. The goal is to accompany people on their individual paths to self-realization by effectively conveying good thoughts to them. Stefan Frädrich, CEO Alexander Müller and a team of more than 70 people accordingly attach great importance to bringing relevant content to the point together with professionals, experts, trainers and coaches. The aim is to create a motivating environment within the framework of events, seminars and online courses and to impart knowledge that will help people to progress, for example as self-employed people and entrepreneurs, but also on a very personal level.
As recently as November 2018, GEDANKENtanken held a big speaker night in the LANXESS arena, which was sold out with 15,000 people, and featured numerous top speakers. During the event, journalist Dunja Hayali and rock musician Peter Maffay were presented with the GEDANKENtanken award "The Blue Tongue". In their laudatory speeches, comedienne Carolin Kebekus and TV presenter Bettina Böttinger honored the award winners for their commitment to freedom of expression and tolerance as well as their clear stance against xenophobia and racism.