Conflicts in the team - analysis and finding solutions 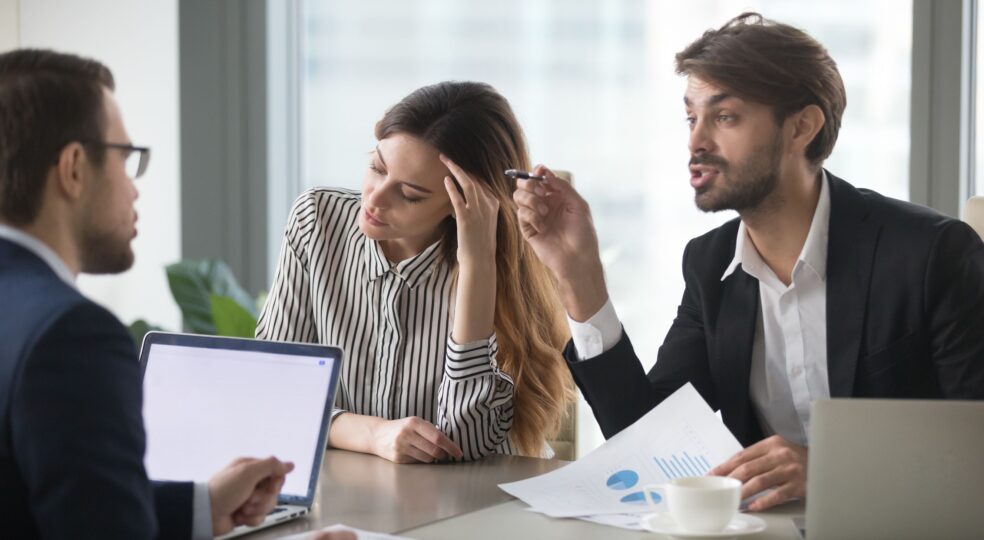 Conflicts are inevitable in teamwork. This is because different characters come together. Everyone has their own working style and their own goal. That is why it is so important to recognize conflicts in the team.

What actually is a conflict? How do these frictions arise? And how can such conflicts be resolved? You will find out if you intensively deal with the topic of leadership and conflict management.

The cause of a conflict are different opinions and interests. The conflict hardens when these differences are defined as irreconcilable by the opposing parties. This is followed by actions: The conflicting parties hinder each other.

Interesting facts about conflicts in the team

If you want to resolve conflicts in the team, the first thing to do is to analyze the points of contention. A look at the different forms of conflicts in the team shows that opposing opinions do not necessarily have to be bad. Organizational psychology definitely sees positive aspects in conflicts.

Which conflict type are you? Especially as a leader you feel responsible for resolving disputes. Some people tend to avoid conflict - but this is just an evasive manoeuvre and not a solution. It is better to find out the causes and to be honest with each other.

A study conducted by the Hernstein Institute suggests interesting Data on conflicts in the workplace before. It points out the increased costs caused by conflicts. In German workplaces, about 15 % of time is lost to conflicts. For managers, the time spent on direct conflict management and working through the consequences of conflict is even higher.

Conflicts in the workplace often lead to absenteeism and treatment costs. This places an enormous burden on the national economy, as an absenteeism report by the AOK shows: The total is over 40 billion euros. The annual conflict costs of companies with up to 100 employees are between 100,000 and 500,000 euros. Help is urgently needed.

How do you recognize conflicts in the team?

Identifying and resolving conflicts in a team - this task requires a good strategy. As an experienced manager or business coach you are well prepared for it. With a problem-oriented approach, you will succeed in clarifying the conflicts in the team. But first you have to identify the dispute - only then do you carry out an analysis of the conflict situation, which you finally clarify.

You want to know more? At Business Coaching you will learn how conflicts influence work motivation. Here you will also learn about the appropriate strategies to resolve conflicts in the team. This increases the Employee satisfaction: this is important for the working atmosphere and also for productivity.

Recognize conflicts in the team - the sooner you see the problem, the sooner you can act. Here it helps to know the typical conflict signals. Typical signs of conflict are:

Analysis of conflicts in the team

The problem is that a conflict in the team always affects the whole working group. That's why those affected want to resolve the conflict as quickly as possible. However, known solution strategies are not always suitable for this. Stay calm, analyse the situation and take your time - this will help you make better progress.

First of all, you ask the question about the subject of the conflict. Are the opposing attitudes really incompatible or are there common elements?

The next point relates to the course: What event triggered the conflict? When did the dispute escalate? What do the parties to the dispute say about it?

A third aspect is the parties themselves. Who is affected by the conflict in the team - how do the employees relate to each other? Does anyone profit from the dispute?

Finally, the analysis is about the nature of the conflict in the team. Is someone organizing a power play? Is there a lack of Appreciation in focus, perceived disadvantage or something else?

If you have identified and analysed the conflict in the team, you are well prepared for the later mediation phase.

What are the most common reasons for conflicts in the team?

However, conflicts in the team often arise for other reasons:

Even as an experienced manager, you can't avoid conflicts in your team. But with the right tips, you can get to the heart of the problem. What seems to be a factual issue at first glance is based on the personal relationship between employees. The following examples of conflicts in the team give you a small impression.

Conflicts in the team - examples

A typical case study of conflict in a team is the question of a day off. One employee marches up to the boss and says that he wants to take the day off. The other looks after him enviously because he doesn't dare. He picks on the braver colleague who doesn't even know what's going on. Basically, this is an internal relationship conflict that hardly ever gets out.

A classic distribution conflict looks like this: One department gets a modern color printer, the other must continue to get along with the old printer. A dispute breaks out between the teams because one department feels unfairly treated. The other department fights back, because after all, it has delivered more work and thus deserves the new printer.

What are the phases of conflict?

Conflicts can be divided into different phases. If you act early, the fronts will not harden too much. However, too fast actions can be counterproductive.

Friedrich Glasl, an Austrian organizational consultant and conflict researcher, has published a Concept with three levels and nine stages of conflict escalation ...in front of us. The steps lead downwards, because the methods of conflict struggle become more and more primitive. The lower the opponents get, the harder it is to get back to the top. Then outside help is needed.

(Both parties can still come out in one piece).

The first tensions arise. However, differences of opinion can still be clarified in conversation. No party formation.

The parties put each other under pressure. Uncompromising, verbal violence.

Level 3: Actions instead of words.

Empathy wears off, Mistrust strengthens. The opponent must come to terms with faits accomplis.

(Only one more can win)

Mutual grouping, rumors. Instead of the thing itself, the focus is on the fight.

The punches land below the belt, exposing the opponent, losing morale.

Each party to the conflict wants to win. Demands, blackmail, threats of punishment. Striving for power, intensification of the conflict.

Tricks to the detriment of the other, while their own harm is also seemingly purposeful. Loss of values and virtues.

Goal: the collapse of the other party. Goes to the physical and psychological destruction.

The deeper conflict phases have a very drastic effect in this 9-phase model by Glasl. As a variant, there is a conflict model with four phases:

The role of the manager in team conflicts

A conflict arises in the team - how do you react correctly as a manager? In traditional, hierarchical management structures, the guidelines come from the top. This is also reflected in how you resolve conflicts. Just as with the work itself, there are also possibilities in conflict management to delegate.

As a leader and coach at eye level with your team, you maintain control, but some decisions and actions are also their responsibility. With our tips from the Greator coaching seminar The art of delegation you learn how it works. The coaching skills will help you to fulfill your role as a leader well. This includes a good Conflict Managementfrom prevention, through recognition and diagnosis, to resolution. By promoting an open conflict culture, you strengthen your team and increase motivation.

4 steps to successful conflict resolution in a team

Avoiding conflicts does not work, because then they continue to smolder underground, like a volcano. But you can prevent them. With a jointly structured conflict culture and a few rules, you can make your team fit for the future.

The following four steps are helpful:

In your discussions, it is important to be open and to listen carefully to others. Blame has no place here. Instead, the focus should be on the needs and ideas of the individual employees. It is very important for a healthy conflict culture to treat each other with respect and to focus on the essentials.

Different methods for conflict resolution in the team

You recognize a serious conflict in the team - now it's time to act. Solutions from an upper level do not promise much success. Often it helps to sit down together to find an acceptable solution.

There are various methods for dealing with conflicts in the team. If it is a factual conflict, there are often several ways to solve it. With a little creativity and honesty, you can come up with new ways of thinking.

Solving conflicts in a team - methods that have proven their worth:

The type of conflict in a team always depends on the situation. How does a manager resolve a team conflict when interviewing a new employee? How do conflicts affect personal development? Conflicts in the team can be specifically clarified within the framework of supervision. The supervisor accompanies the employee team and analyses the situation, the potential and the need for development.

At Team coaching you learn how working together works and how conflicts in the team can be solved. Of course, everyone is allowed to represent their own point of view, but the common denominator is an essential pillar of the team. This is exactly where our team coaching comes in. It is ideally suited as an accompanying team measure over a longer period of time.