Fear of change - How to overcome it and set yourself free 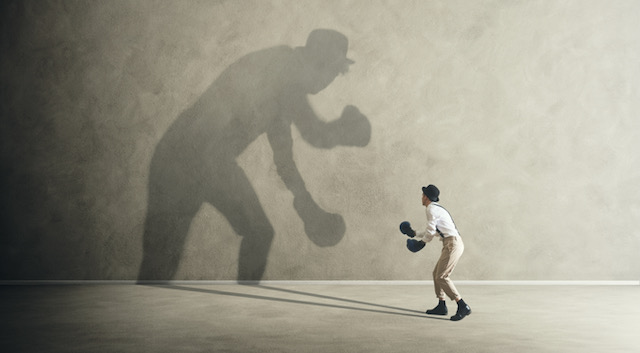 Many people are afraid of change. But what is the reason for this? And how does change work in the first place? How can we dissolve inner blockades and resistances in order to unfold our full potential?

This is the topic we would like to explore in today's article. We want to show you ways that you can conquer the fear of change so that you can finally live the life you've always longed for.

How fear of change arises

The fear of change has several reasons. One decisive factor is the human body. This has its own memory. Sometimes the body takes over and evokes emotions from the past.

If, for example, you experienced pain, sadness or suffering in a situation when you were young, then it may be that your body remembers these emotions, stores them away, so to speak. Possibly it was fear, anger, powerlessness at that moment - which you feel again and again today, especially in moments when a similar situation happens to you. Possibly it was a conflict with your father at that time, today it is the boss who triggers you.

The result: There is a permanent presence of negative thoughtsand physical sensations and feelings that paralyze us. At some point, the negative emotional states become so extreme that they are almost unbearable. Often body symptoms such as headaches, a hard back, abdominal pain, a lump in the neck or chest... You probably know best which part of your body is calling out when something is bothering you!

Here's a quick example. You are on your way to work and think to yourself: "In a minute, I have a meeting with a colleague who's always acting up." As a result, the brain sends an impulse to the body.

The body sends an impulse back to the brain and the thought carousel goes into the next round. You remember a meeting last week where your colleague drove you crazy.

The mind game continues until you arrive at the office totally annoyed, exhausted and stressed. You want to go home and hide under the covers.

The problem: If you repeat these kinds of mind games every day, your body gets used to negative states of being. As a result, the fear of change burns itself into your psyche because you no longer believe that anything can change.

So you unfold your full potential

You want to know how to learn to deal with the fear of change? We would like to give you three important steps on the way, so that you can dissolve your old patterns and emotional imprints. So that you can finally use your full potential in your private and professional life!

If you want to let go of the fear of change, it's important first:

Once you become aware of this, you have finally laid the groundwork to form "the new you".

This means the "I" that is not afraid of change. The new you! The one that desires change and is ready to take one more step out of its "self" for it every day. Comfort zone to step out. To free yourself from old fears and Beliefs and open yourself up to new experiences. Because through the new neuronal networking your brain will immediately perceive the impending change and store it over time.

We humans are shaped by experiences. These experiences have contributed to the development of inner programs, emotional imprints and repetitive behaviors that prevent us from moving forward.

By the time we are 35, we have developed dozens of such inner programs, imprints, and behaviors that are the cornerstone of our fear of change. Or to put it in other words: You are controlled by your past.

So what can you do to break out of these patterns? Your goal now should be to create new neural connections in your mind so that your body develops a productive reward system that will help you grow personally and professionally.

Because as you've already learned in this article, destructive emotional imprints arise because of negative events in early childhood. In this context, the first seven years are particularly formative.

Conversely, this means that you are allowed to gather more and more positive experiences, from which positive behaviors are derived. These release happiness hormones in your body that support you in realizing your full potential.

Once you have succeeded in this, your fear of change will become smaller each time. It may not disappear completely all at once. But you will quickly notice how it no longer defines you. And this effect alone will give you a lot of inner peace. Through the newly created neural networks you will have more energy, which will support you to pursue your goals and visions with all your might. Promise!

In order to generate new neuronal connections, it is already sufficient if you imagine certain things (e.g. through visualizations). In this context, also ask yourself which feelings and values (such as Lightness, dedication, clarity, honesty, openness or love of life) you want to attract into your life.

To put it in a nutshell: Focus your thoughts on the path you want to take in your life.

Hero Story: How Lilly conquered her fear of change

The fear of Change is one of the main reasons why we don't make progress. Lilly has also had to make this experience.

A few years ago, she was head over heels in love with a man who left her for a younger woman. For Lilly, a world collapsed at that moment.

"How could he do such a thing to me? I mean, we loved each other to death. How could he just throw our love out the window?", she asked herself. Lilly didn't understand the world anymore and fell into a deep emotional hole.

Experiences from childhood shape us into adulthood

After this experience, all men were written off for Lilly. From then on, every man in her eyes was an adulterer, cheater and selfish macho, who was only concerned about his own well-being. It is possible that this experience did not just shape her now. She will almost certainly have had a very similar experience in her childhood, which was now being repeated later in life. And that is why Lilly was so deeply affected and moved.

Subconsciously, Lilly had imprinted on her mind exactly this type of man. And that's why she only met the kind of man who caused her suffering. In the next relationships she was hurt again and again and her heart lay in shards at her feet.

One day she met Frank. Frank was a new colleague and very different from the men she had met in the past. He was friendly, courteous and attentive. Lilly wasn't sure how to deal with Frank at first.

Open yourself to new experiences

Because she was not used to these qualities from a man. From week to week, however, Lilly noticed how something changed in her. The new experiences with Frank changed her character.

Frank had broken through Lilly's fear of change and Lilly fell in love with him. However, she was afraid to confess her love to him. However, one day Frank came to her, gathered his courage and asked her out.

Lilly couldn't get the grin out of her eyes and was glad that such a man had found his way into her life.

Conclusion: You too are capable of conquering your fear of change.

The fear of change does not have to be an eternal condition. We have it in our own hands, in which direction we align our lives. This means that you also have the potential to go your own way and to realize yourself.

How to overcome your fear of change

You would like try new things, but you don't dare? Learn in just a few minutes how to:

✓ better cope with the fear of change
✓ gain new and positive experiences
✓ become braver and accept yourself with self-confidence
PARTICIPATE now for free
Reviewed by Dr. med. Stefan Frädrich