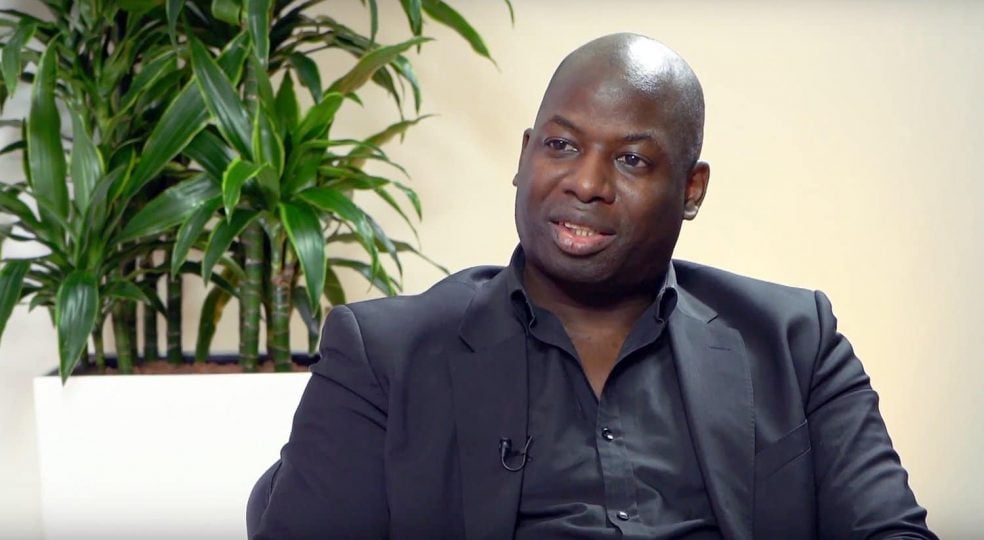 Kelechi Onyele is a big fan of hip-hop culture. He works as a choreographer and coaches CEOs and aspiring professional footballers - including the young talent of the German Football Association. Recently, the successful speaker was specially honored by the mayor of Frankfurt: he received an award as an outstanding personality with a migration background. In an interview with Alexander Müller, Kelechi Onyele talks about the award, coaching the DFB junior players and his personal career.

Kelechi Onyele was born in Germany and has a German passport. His parents moved to Germany from Nigeria in the 1960s. He says: "I feel like a 'citizen of the world'. Germany is my home country. The migration issue is therefore much more important to others, perhaps because of the colour of my skin. Recently I received this award because I seem to be doing exciting things. This is a great honour and makes me very happy." Exciting things is our keyword: Kelechi Onyele works as a coach for the DFB youth. How exactly can you imagine that?

In an interview, the successful trainer reveals: "I have developed my own concept, which is all about the personality development of young players - and it's all about movement. So it's not just about speaking, but about working with the aspect of movement. Everybody knows: music opens. Movement opens. If you don't move in life, you stay still. And I use that in conjunction with my expertise as a choreographer. I know ways that lead to opening someone up. Then you sit down and go deeper into the issues."

Kelechi Onyele - a master at it, Moving people

Kelechi Onyele is a master at moving people. In this interview, he talks about the issues that move young footballers on their way to a professional career. Kelechi Onyele: "They are everyday issues that everyone has, for example: What am I going to do after my career? How do I actually feel on my way into the football business, which is something completely different from everything before? With me, the players have a protected space and can be themselves without anyone using it against them. The players take to that very well."

The life of a budding professional footballer is vastly different from that of other youngsters. Kelechi Onyele: "Every one of us has dreams, wishes and visions that we want to achieve. You compare yourself and are constantly judged from the outside. And I see that the players in the economy get a bit of a raw deal. There's a human being with feelings and with suffering. Just because you're a professional football player at 20 doesn't mean you're already in the adult ego. Maybe you're still in the child ego on some issues and you don't even know how to deal with ego issues or saying no." This is where Kelechi Onyele's coaching comes in.

The expert works at a crucial interface. He says: "Of course there is a lot of pressure. It's not so easy when everyone is constantly judging you. And that's where you first have to give people a lot of respect for the job they do. Because it's a tough job." Kelechi Onyele himself also played football at a high level as a youth, namely at FSV Frankfurt. In the end, it wasn't quite enough for a professional career. He says: "Because I played football myself, I naturally have a big advantage, because the players understand: He played football himself, he's one of us."

But Kelechi Onyele has much more to thank football for: "Being a team player, getting in sync with people you don't even know, no matter where they're from. Those are important things! Fighting together for a goal. Losing, winning. That everyone can see it - and everyone has an opinion. And then you have to perform again the next time. To be on such a level is of course fantastic - because you can learn a lot. But on the other hand, you also make a lot of mistakes. And when you're at one with yourself, those mistakes help you improve bit by bit."

What would current coach Kelechi tell his 18-year-old self today if he could? He says: "Trust in yourself. Understand that football is not everything. Talk to the people around you and get people on your side who know how the football business works. You need people who speak for you and who are connected. I didn't have that back then, unfortunately. If you're super good, that doesn't mean anyone will see you because of it. There are so many good players. You always have to be lucky enough to get a chance. To Kelechi, I'd say, "Take it easy. Life offers you so many other opportunities outside of what you see right now. And if you're pure of heart and have skills, you'll always get ahead in life anyway."