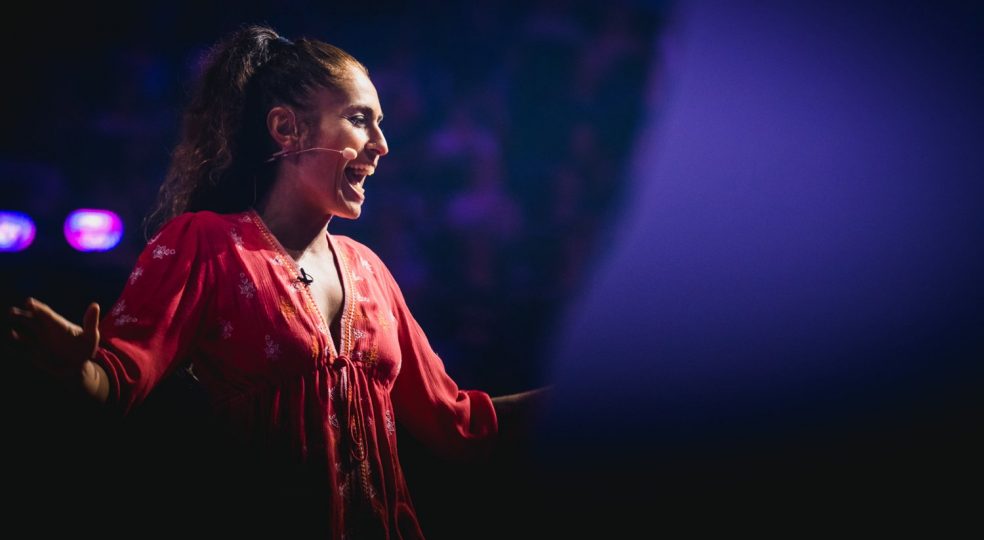 Bahar Yilmaz is one of the best-known speakers on personal growth and spirituality. Her own journey into personal development began 15 years ago. But the 35-year-old has had a connection to the spiritual world for much longer. She reveals, "Children have a special ability to create their own worlds in their imagination. Ever since I was a little girl, I've felt like I was somehow different from everyone else. That feeling is the best proof of being spiritual." Bahar also encourages you to let go of your inner struggle and live your spirituality.

Bahar Yilmaz was born the youngest of three siblings. Her parents worked hard to keep the family afloat. Bahar Yilmaz spent a lot of time with her grandmother. She could see energetic signatures and passed this special ability on to her granddaughter. Bahar Yilmaz: "My grandmother could read minds and feel emotions. She transmitted all of that to me. She showed me what spirituality means."

Reflection of your soul

Bahar Yilmaz still has the feeling of being different and somehow not fitting into any pigeonhole. She says, "For spiritual people, I'm too unspiritual. And for people who are concerned with personal growth, I'm always the esoteric aunt." An inner struggle. Today, however, Bahar Yilmaz appreciates this otherness because it allows her to fulfill her mission. She tells us, "I want to combine the best of the spiritual world and the outer world."

The successful speaker is convinced that one cannot not be spiritual. In her talk, she explains, "Spirituality is a natural reflex of the soul. The people who don't want to be spiritual are simply afraid of depth. But depth is important because we are all tired of superficiality. We all want more honesty with ourselves and more Authenticity in our lives. Sometimes the universe reaches out to you because you've made a powerful decision. And if you really want to change something, you have to push forward massively and put all your cards on the table."

After successfully completing her business studies, Bahar Yilmaz built a dream life for herself in Switzerland - or at least it all looked like it. She says: "At the age of 22, I was a successful entrepreneur. I lived in a dream house, had a dream job and was in a relationship with a dream man. But it all looked good only on the surface. Inside, it was a struggle. Secretly, I was in a very bad way. I had starved myself down to 42 kilograms and was extremely unhappy. I wondered how this could have happened. After all, I had manifested my dream life."

But what Bahar Yilmaz had really manifested was not her dream life, but a life that she thought should be so. She had created constructs that she thought were right, but which did not fit her at all. In the lecture she says: "Inside I was bleeding. I had manifested my personal suicide and my body was the mirror for it. I didn't weigh anything anymore and I had no substance physically because I was fighting myself all the time."

Perhaps you can relate to situations where you feel like you are fighting against yourself? Perhaps you yourself sometimes push aside negative thoughts, doubts and fears or anesthetize them with Meditations and affirmations? Bahar Yilmaz knows: "It may make you feel good, but it's not a real transformation. I had to learn that the hard way back then: on the outside I was the enlightened one, but on the inside I was a wreck. And yet I kept fighting. In the end, my false pride nearly drove me to the grave."

But from one day to the next, something happened that changed everything in one fell swoop. Bahar Yilmaz: "Everything collapsed: My business, my relationship - within 24 hours I had nothing. I was brought to my knees by the universe. That was a really bad moment. I really felt like I had just been hurt and wondered why the spiritual world wasn't helping me. At the same time, it was my greatest happiness. Because sometimes what you want is a much greater happiness when it doesn't reach you. I was able to experience that at the time."

After this experience, Bahar Yilmaz was searching for herself - or rather, fleeing from herself. A conversation with her sister opened her eyes. She says: "I was not only losing myself, I was also very selfish. Because the whole time I was just focusing on my success and on my life. Looking back, I know I just forgot about the people who loved me so much and whom I love so much. But while talking to my sister, everything changed: I realized that sometimes a hero has to lose to be a winner."

Sometimes you have to let go of the struggle. Bahar Yilmaz: "Every time you lose, another part of you wins - usually it's your heart." Do you often feel like you're completely drained at the end of the day? Do you steadily take a few steps forward only to find yourself running backwards? Do you sometimes think that you should actually be doing or thinking something other than what you are doing or thinking? If so, it could be that you are fighting an inner battle.

Let go of the fight

Your inner struggle will always look for a place to come out. Bahar Yilmaz: "I became anorexic at that time. For other people, too, their inner struggle makes itself felt in the form of illness. But it may also be that the inner struggle shows up in your personal or professional life. Then you feel that you can't live your potential in that situation."

Bahar Yilmaz also reveals how long it will take you to let go of your inner struggle. Don't worry, it doesn't take weeks, months or years. Bahar Yilmaz: "All you need is a single second in which you decide to let go of that struggle!" Do you feel like joining Bahar Yilmaz in stopping your fight against yourself? Then watch the video in full, because a powerful meditation exercise is waiting for you at the end. We wish you much success with it!