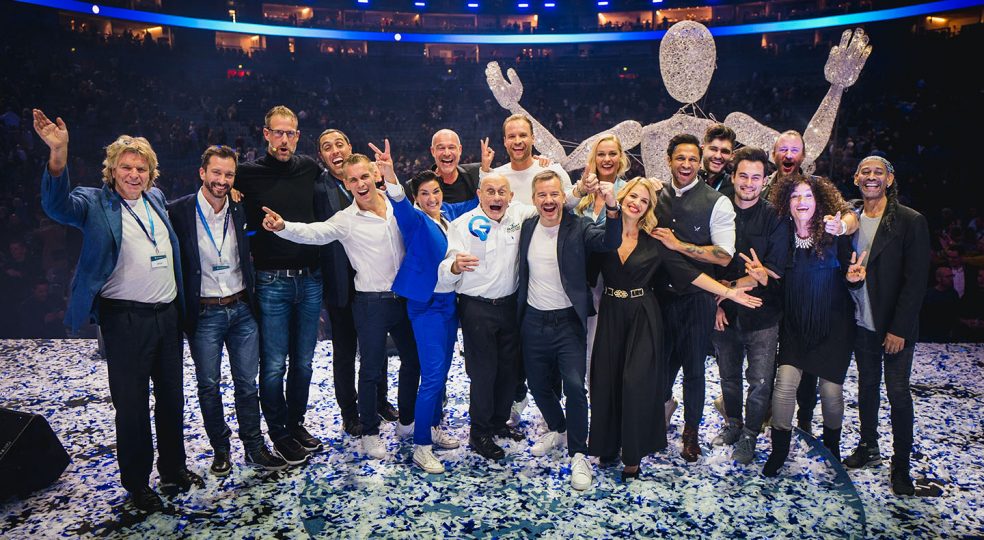 On Saturday evening, the last GEDANKENtanken SPEECH NIGHT took place in the sold-out LANXESS arena in Cologne with Jairek Robbins, Frank Thelen, Auma Obama, Stefan Frädrich and Miriam Höller, among others. In the future, the format of the SPEAKER NIGHTS will no longer exist, because the training start-up GEDANKENtanken will focus on digital offerings from now on. A separate GEDANKENTANKEN festival is also planned for 2021.

Cologne, November 24, 2019 - In the packed LANXESS arena in Cologne on Saturday evening, more than 15,000 people experienced the last of the big THOUGHTFILLING SPEECH NIGHTS. Right at the beginning of the Susan Sideropoulos and Alexander Müller speaking events, the well-known stunt woman, speaker and entrepreneur inspired the Miriam Höller the audience with a breathtaking fire stunt and a rousing talk. The stars of the evening also included the American psychologist, motivational trainer and best-selling author Jairek Robbins. His goal is clear: to enable others to create their own personal Achieving goals. Robbins emphasized that learning to live and pass on what you have learned is central to this.

The founder, entrepreneur and investor Frank Thelen became known to a large audience through the VOX television show "Die Höhle der Löwen". In Cologne, he gave exciting insider insights into the ever-growing world of digital technologies and industries of a not-too-distant future. Already at the highly acclaimed World Leadership Summit, to which GEDANKENtanken invited the former US President Barack Obama to Germany, he was part of the line-up.

In addition, Barack Obama's sister, founder and initiator of the Auma Obama Foundation Sauti Kuu, with whom GEDANKENtanken works closely, was also enthusiastically celebrated by the Cologne audience. The Kenyan scientist presented the work of her foundation and generous donations were also made on Saturday evening. A total of 46,235.55 euros was collected, rounded up by GEDANKENtanken to 50,000.00 euros. GEDANKENtanken and the Auma Obama Foundation Sauti Kuu use this donation sum to enable children and young people in so-called developing countries such as Kenya to achieve sustainable personal development.

Another highlight was the performance of Rüdiger Nehberg. According to Dunja Hayali and Peter Maffay Last year, the prominent survival expert and human rights activist received the opinion leader award "The Blue Tongue". Nehberg had campaigned against female genital mutilation for several decades and had made a huge impact with his exemplary behaviour.

"We are now consistently taking the next step," says GEDANKENtanken CEO Alexander Müller. "We are cutting back old habits so that new ones can grow. In concrete terms, this means that we are placing our focus on digital continuing education offerings in order to be able to reach even more people worldwide in this way, whom we then accompany on their individual path to self-realization." In addition, a dedicated GEDANKENTANKEN festival is planned for 2021 in Cologne. "The aim here is to bring together our international community, whose members will be able to meet in person at a real location and thus network and exchange ideas to an even greater extent," Alexander Müller highlights. "The festival spans the Cologne exhibition grounds and the LANXESS arena. More than 200 speakers will perform on ten stages. We expect 50,000 visitors at the world's largest festival for personal development."

Since 2012, the company GEDANKENtanken has been following a mission: Their goal is to revolutionize the world of personal and professional development. In different formats, experts, trainers and coaches create a motivating environment both online and offline and convey relevant content that supports people, for example as self-employed people and entrepreneurs, but also very personally to develop their own potential. In 2019, GEDANKENtanken was named Germany's best employer by Great Place to Work. The company of Alexander Müller and Dr. Stefan Frädrich employs more than 80 employees, whose Satisfaction is one of the central building blocks of the corporate culture. GEDANKENtanken next wants to answer the question of how people can be optimally supported in everyday life as a digital companion in order to develop personally and lead a successful, happy and fulfilled life. GEDANKENtanken wants its app to be on the home screen of every smartphone.