"The Big Five for Life": bestselling author John Strelecky to speak in Cologne on April 4 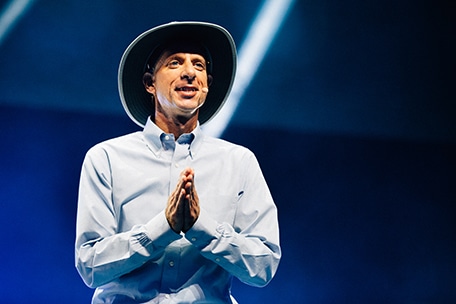 At the GEDANKENtanken World Leadership Summit in the LANXESS arena, prominent speakers will provide impetus for a progressive and peaceful future.

Cologne, March 21, 2019 - With "The Café at the Edge of the World", Florida-based John Strelecky has written one of the most successful books of the decade. On Thursday, April 4, he will be a live speaker at the World Leadership Summit in Cologne's LANXESS arena.

Strelecky was a global success right from his first publication, even though he had no previous experience as an author. Initially, the US American worked as a strategy consultant for companies before radically changing his life at the age of 33: Strelecky sold his property and, on a nine-month trip around the world, developed the idea for what would later become his bestseller: the story about a stressed advertising manager who is confronted with existential questions on the menu of a remote café. "The Café at the Edge of the World," first self-published in 2003, became a long seller. The book has since been translated into more than 30 languages and is a permanent guest at the top of the non-fiction bestseller list in Germany. In 2018, it was also the best-selling book of the year in Germany across all book types.

In the meantime John Strelecky one of the most renowned international leadership experts. He offers seminars himself and trains coaches. The concept he developed, "The Big Five for Life," is designed to help people find their personal Life goals with their work. The 49-year-old wants to inspire people and companies to leave their familiar paths. He will explain the basics of this in Cologne. The text of Strelecky's presentation in English will be projected simultaneously onto several screens in the LANXESS arena for people to read along.