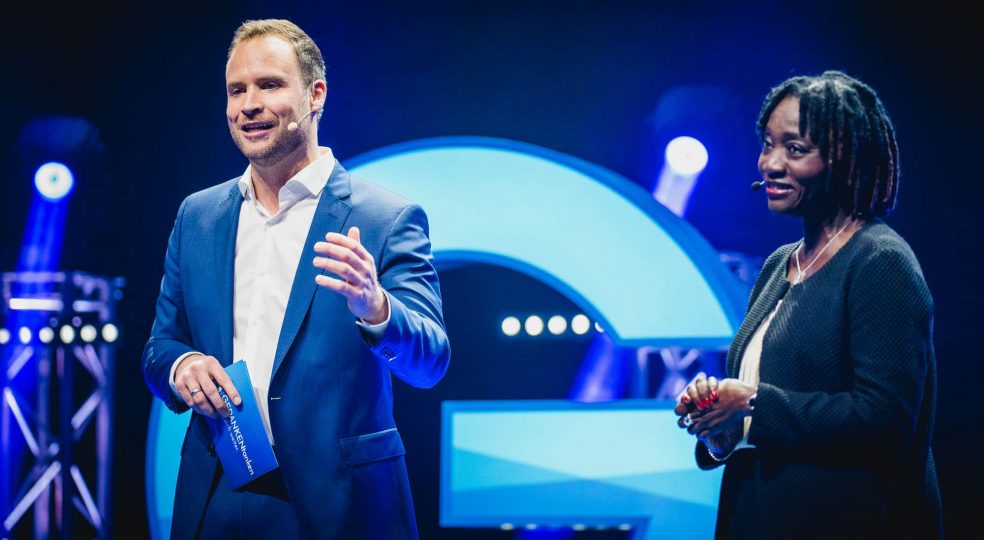 The well-known key note speaker and pioneer in sustainability issues and the Cologne-based company have entered into a long-term strategic partnership. Dr. Auma Obama will attend the GEDANKENtanken World Leadership Summit and present this cooperation at a subsequent dinner with invited guests. A significant five-digit donation generated from the proceeds of the event will benefit the Auma Obama Foundation Sauti Kuu.

Cologne, March 27, 2019 - For Dr. Auma Obama, "sustainability" is not just a word. The Kenyan lecturer, author and founder as well as board member of the Auma Obama Foundation Sauti Kuu has been campaigning for socio-economically and ecologically sustainable development worldwide for years. Against this background, the Cologne-based company GEDANKENtanken, which has been organizing seminars, online courses and speaker nights on a wide range of topics, especially on issues of personal development, since 2012, and Dr. Auma Obama have agreed on a strategic partnership. As one of the world's leading minds advocating for more sustainability in terms of a progressive and peaceful future for humanity, Dr. Auma Obama will also be present at the GEDANKENtanken World Leadership Summit, which will take place on April 4 at the Lanxess Arena in Cologne. At the dinner that will follow, some of whom will be invited guests, Dr. Auma Obama will present the work of her foundation and explain initial ideas for cooperation in person. A good five-figure sum will be donated to the Auma Obama Foundation Sauti Kuu from the proceeds of the GEDANKENtanken World Leadership Summit. Further joint actions are planned for 2019. "GEDANKENtanken's approach of sharing good thoughts, knowledge and skills fits well with my approach of giving youth and their families a strong voice," said Dr. Auma Obama.

"Dr. Auma Obama and GEDANKENtanken got to know each other a few years ago at the German Speakers Association and have been planning to work together for quite some time," says Dr. Stefan Frädrich, founder of GEDANKENtanken. CEO and co-owner Alexander Müller continues: "Our vision is to support people in living their own potential and thereby realizing themselves. Dr. Auma Obama's vision is very similar, and that's why it's a great fit. Both partners want to encourage people to lead a self-determined, happy and fulfilled life. That's why this cooperation, which by the way is designed for the long term, is so important to us. The upcoming GEDANKENtanken World Leadership Summit is an excellent occasion to officially announce our cooperation. We are looking forward to great joint projects and are already working on concepts to sustainably support young people in Kenya and beyond."

The name of Dr. Auma Obama's foundation, "Sauti Kuu", is Kiswahili and means "strong voices" in German. Accordingly, the organization has set itself the goal of giving children and young people around the world in particular a strong voice by concretely involving young people in the discussion of future issues and the shaping of their own future. The aim of the Auma Obama Foundation Sauti Kuu is to make children and young people from socially disadvantaged families aware of the strength of their own voice and their own potential. This includes various workshops in which their social and personal skills are strengthened so that they are able to build their own existence as self-confident young adults.

In addition to her commitment in Kenya, Dr. Auma Obama has also carried out projects with young people in Germany, working with the band Höhner, among others. In addition to her commitment to her foundation, she is also active as a member of the World Future Council, which campaigns worldwide for responsible, sustainable thinking and action in the interests of future generations. She was also a member of the Board of Trustees of the "Stiftung Lesen" (Reading Foundation) and the Advisory Board of the Academy for African Studies at the University of Bayreuth for many years. The speaker is the sister of former US President Barack Obama.

The GEDANKENtanken World Leadership Summit on April 4 at the Lanxess arena in Cologne is organized by Klaus Ulrich in cooperation with GEDANKENtanken. Tickets are available in advance at www.eventim.de and at the usual ticket agencies. Exclusive VIP and box seats are also available.