How to recognize toxic masculinity in your relationship 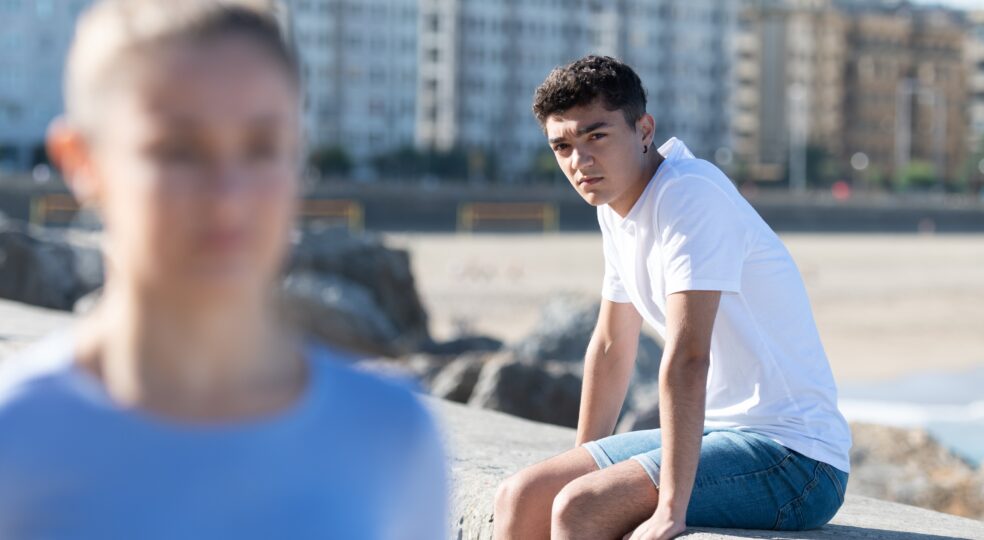 Many men have still internalized the classic role model of the stronger sex. In order to feel like a full-fledged man, they want to be perceived as dominant by their environment. However, this desire can take on destructive proportions, so that the allegedly masculine behavior harms both the men themselves and their environment. In the following article, you will learn how toxic masculinity develops and how you can recognize affected men.

What is toxic masculinity?

Toxic masculinity, as mentioned at the beginning, refers to destructive - i.e. damaging - behavior that is fed by the old role concepts of how a "real" man is supposed to behave. This refers not only to the outward appearance, but also to the emotional world. emotions to feel or even show openly is considered effeminate by toxic men.

Most men internalize this role model already in childhood. They experience their male role models as strong, dominant and aggressive. Sooner or later, this is reflected in their own behavior. Toxic masculinity does not allow any gentleness or consideration, as a result of which those affected develop into empathy-less contemporaries.

Although toxic men will do anything to live up to their own expectations, they rarely lead a fulfilled life. Their behavior exposes them to numerous risks and often entangles them in violent confrontations. The consequences can be social isolation and depression.

Find out, Whether your relationship is toxic! Our free relationship quiz will help you see if you're in a harmful relationship - or if everything is in the green.

Only 4 minutes
TO THE FREE TEST

How does a toxic man behave?

Toxic men have internalized a false image of masculinity. Below we have summarized the most common ten beliefs and behaviors by which you can recognize toxic masculinity.

How does toxic masculinity arise?

Toxic masculinity can largely - but not exclusively - be traced back to culture and upbringing. For example, many boys are still taught by their parents that men are not allowed to cry. If children already learn not to perceive their own (pain) boundaries and not to communicate accordingly, they acquire behavior that is harmful to themselves and others.

It is human nature to want to belong. A boy who is constantly told that he has to appear invulnerable and hardened in order to be considered a real man is strongly influenced by the corresponding role model. He associates this misconceived masculinity with success and social recognition. Consequently, he will try everything to conform to this stereotypical image.

Sometimes, however, toxic masculinity develops in the course of life. This may be the case, for example, after a traumatizing interpersonal experience. A once gentle man who has felt severely humiliated may try to build a wall of toxic masculinity around himself.

What damage can toxic men do?

Toxic masculinity expresses itself in aggression against oneself and other people. In what way this is the case, we would like to illuminate below.

A toxic man basically longs for social acceptance, success and recognition. However, through his aggressive and uncooperative behavior, he achieves exactly the opposite. Toxic masculinity can isolate those affected socially and impair them in their relationship life as well as professionally.

Hierarchy problems often arise in professional life. Toxic men take criticism personally and feel their masculine honor attacked as soon as they are reprimanded. However, it is not necessarily beneficial to one's career to attack one's superior verbally or even physically at the slightest disagreement. In the worst case, there is the threat of losing one's job.

Making friends is also difficult for toxic men. Because they see other men as competitors and do not want to be friends with women, they are often very lonely. The pressure of suffering is discharged in increased aggression, because such men have not learned to deal with their emotions in any other way. As you can see, those affected find themselves in a vicious circle.

Toxic men have a lower life expectancy because their mentality encourages them to consume addictive substances as well as engage in risky behavior (e.g., driving too fast). Suicide rates are also significantly higher among toxic men. As they have learned to override their own physical and psychological needs, they are also less likely to seek medical help.

For the outside world

Toxic men are usually quite unpleasant contemporaries with whom one can quickly get into conflicts. They feel easily provoked, even if there is no reason for it. Sometimes a supposedly wrong look is enough. Resolve conflicts toxic men with physical violence, because they have not learned otherwise. So a toxic man in the immediate environment mostly means restlessness and fear.

In addition, toxic men disrupt the processes in the social structures in which they find themselves. This is equally true in the circle of friends as well as in the workplace. A toxic man always wants to be the center of attention and be admired for his masculinity.

Hardly any modern woman nowadays wants an overbearing macho man for a partner. Toxic masculinity consequently has an extremely negative effect on relationship life. Most women long for a partner with equal rights, one who can appreciative and treated at eye level. Toxic men are not capable of this. They basically strive for dominance.

A sad fact is that the greatest danger for women to become victims of homicide comes from their partners and ex-partners. Toxic men who are left for another man and feel their masculinity devalued as a result sometimes cannot bear it. The grief discharges into aggression, which can have dire consequences.

How to recognize toxic masculinity

Toxic men are easy to expose because toxic masculinity is virtually impossible to miss. Below we have compiled three typical everyday examples for you:

Toxic men consider themselves the alpha of the family. This means that they are in the Relationship have to call the shots. Accordingly, they often try to suppress their female partners. This manifests itself, among other things, in toxic men rejecting any support that could be defined as feminine in the old role model (e.g., housework or child rearing).

They do not respond to the wishes and needs of their partners. This applies equally in all areas of life. In extreme cases, toxic men are even prone to sexual assault. They believe that their partner must always be ready for sex when they want it.

Toxic men feel an almost delusional fear of being perceived as unmanly. Therefore, they reject any contact with supposedly unmanly characteristics, which for many of those affected includes the topic of homosexuality. Especially homosexual men are often discriminated against, insulted, threatened or even physically attacked by toxic men.

No personal conflict is required for this. Toxic men attack obviously homosexual persons already if they see them by chance on the street. A toxic man will never compliment a friend or colleague or immediately put it into perspective, so that under no circumstances the suspicion of affection arises.

3. callousness even in the case of strokes of fate

Suppose a toxic man experiences a tragic loss. He will not shed a tear even in the event of a death and will not admit the inner pain. The conviction not to show weakness is so deeply rooted that toxic men remain emotionally cold even in extreme situations. The suppressed emotions express themselves, if at all, in anger and aggression.

Toxic masculinity as part of patriarchy

The fact that toxic masculinity is still so widespread in our society, even though we are striving for equality in all areas, is related not only to individual upbringing but also to patriarchy. The latter means that women are still at a clear disadvantage in some areas despite all efforts.

For example, most leadership positions in politics and business are still predominantly occupied by men, as shown in this Statistics shows.

Toxic masculinity is a social problem that causes great harm both to those affected and to their environment. Unfortunately, the men affected rarely come to the realization that they need to change something about their behavior.

Are you leading a friendship or even Relationship with a toxic Man, it is necessary to take care of yourself first and foremost. No one has the right to attack you verbally or physically. Try to show the person that masculinity does not have to be synonymous with aggression and dominance.