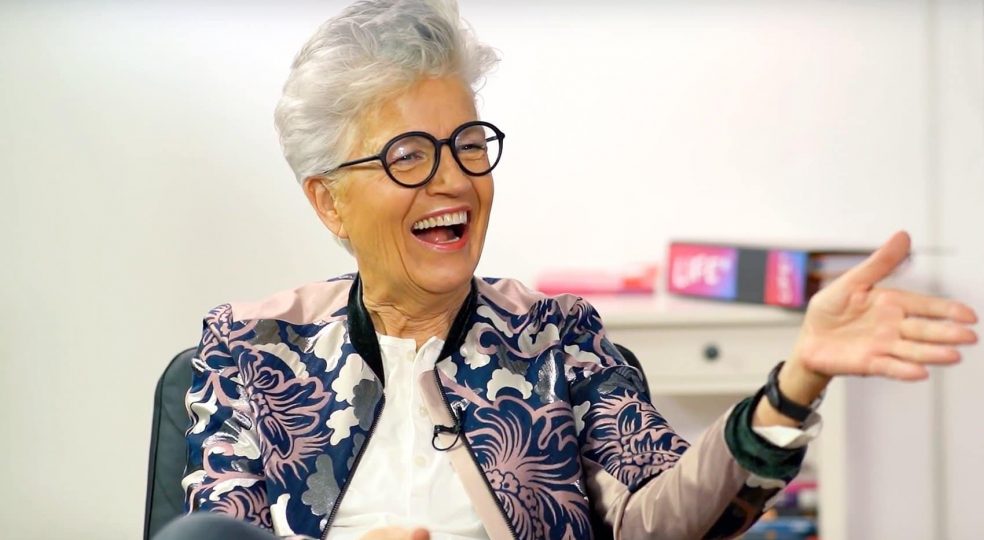 The 71 year old power woman Greta Silver is a YouTuber, author and brand ambassador. But above all, she has a zest for life! Her heart's desire is to teach people that getting older can be really fun. She sees old age as an opportunity to live a happier life. In an interview with Dr. Stefan Frädrich, she reveals, "I believe that we have many opportunities to be happy and live a certain lightness."

Greta Silver: YouTuber with an audience of millions

With her videos, Greta wants to encourage her viewers to take life in general and problems in particular more lightly. She says: "It's a win-win situation. I also benefit enormously from realizing that I can achieve something. That's a great gift for me. And at the same time I know that there are not only complainers at the other end, but people who also take their lives into their own hands. Otherwise you could get the impression from the media that there is a lot of sadness in old age. But I get a lot of positive things and that reassures me."

Greta reaches an audience of millions via YouTube. She started at the age of 66 and has now published over 400 videos on the platform. In an interview, she says: "In the first six months, I published a video every day. Then twice a week and now only once a week because I'm writing a book, which also takes a lot of work and time." But why did she start becoming a YouTuber in the first place? Greta Silver in the interview: "Quite simply because a friend said to me that I had to show the world out there how great it is to be old, because no one knew that until now."

The next day, Greta Silver opened her YouTube channel. However, building reach and gaining followers wasn't that easy at first. But her perseverance and stamina paid off. Her book "Wie Brausepulver auf der Zunge" (Like sherbet on the tongue) also became a SPIEGEL bestseller. In the interview Greta Silver: "I finished eighth. That's unbelievable. I mean, no one would have guessed that was still possible. What stupid images we have in our heads that you think nothing happens when you get older."

Greta notes that the time span from 60 to 90 is exactly the same as the time span from 30 to 60. Greta: "In this time you get to start all over again - without the stress you might have had at 30. And that's when the questions come up for me: What do people actually mean when they say they feel young? What is that feeling? What does it mean? Does it mean you can still do anything? Or does it describe the feeling in your heart that's going on?"

Greta Silver: "The lightness of life is stunning"

If we maintain a certain light-heartedness, live into the day and see what time has in store for us, then we expect positive things and develop anticipation for life. Greta Silver in the interview: "But do you have that at the age of 20? At that time you have planning phases and uncertainties - so you lose that joy quickly. When you're 30, you're in the phase of planning your career and starting a family. And does the 40-year-old still have that tingle in his stomach? Or does he already start to ponder and wonder what else is going to happen in his life? I actually find that you have to grow old to be young."

According to Greta Silver, in order to be able to live the initial ease again, you have to get to a certain age. In the interview she tells: "In most cases, when we get older, we no longer have responsibility for our children - because they are independent. If we've had responsibility for co-workers or colleagues, that's probably going to be relative as well. That means that when we take a risk, we take it for ourselves. And that's so much easier than when it affects others as well. So there's a new ease that comes into life - and it's stunning."

Greta Silver in the interview: "Take yourself Time for creativity“

According to Greta, lightness is also essential for creativity: "Age is a perfect breeding ground for creativity. I often hear that people still feel young at 60 or 70. And then I wonder where that is visible, where they show it. Is there or was there a societal image in our heads that made us think we had to put a grey coat over it? No - out with this youthfulness that we just tried to define."

For Greta herself, family was the main focus for a long time. She says in the interview: "I have three children and was a housewife and mother for 17 years. With husband, house and dog. It wasn't always great, but it was a very precious time. It was an important and great phase in which I learned a lot. I got to the edge of my nerves at times and it was monotonous at times. But I think I learned creativity during that time. I had to come up with something to keep the ceiling from falling on my head." Greta discovered at a young age that no one but her... is responsible for her own happiness - and that she should never blame anyone for her misfortune. A thought that helped her enormously in life. What other self-knowledge Greta would like to share, you will learn in the second part of the interview!