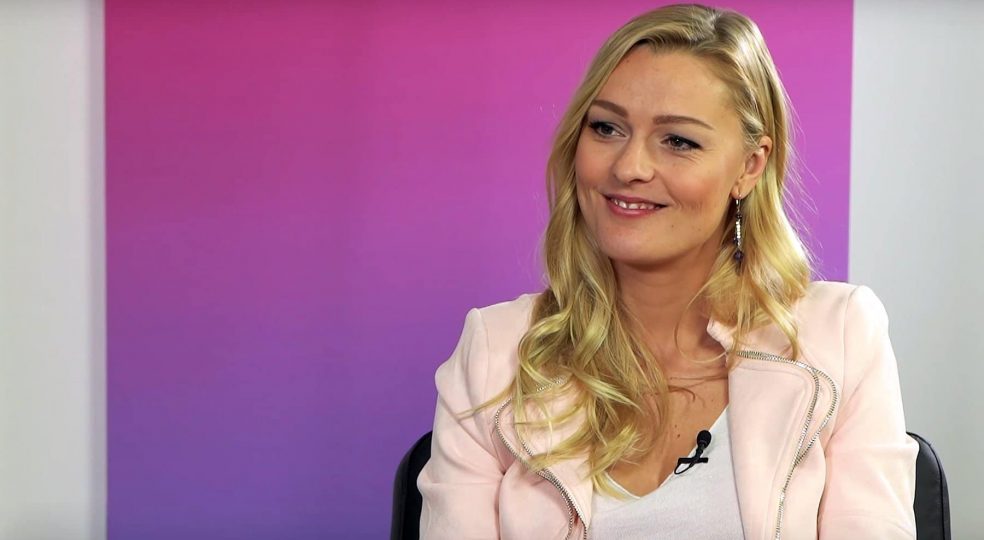 Miriam Höller has made it: The 31-year-old is living her dream and is where she always wanted to be. She already has a stellar career as a stuntwoman behind her, has worked successfully as a model and has been in front of the camera several times as a presenter. But Miriam experienced not only highs, but also lows. In an interview with Alexander Müller, she reveals how she deals with setbacks and what she would like to pass on to young women.

Even as a child loved Miriam Höller Stunt and action shows she watched regularly at nearby amusement parks. She says, "I went there every day after school and wanted to be an action hero. I knew that was my dream job." Originally, Miriam wanted to be a ballerina. In the interview, the 1.84 meter tall blonde tells: "I did a classical ballet training. But at some point I got too big to dance."

But since Miriam wanted to be on stage and inspire people, she found a new passion a short time later. When she saw a stunt on TV by chance, her new dream developed. She reveals: "Even as a child I was very into action, brave and ambitious. My parents always supported me, no matter how crazy my ideas were. So when I was 15, I wanted to become Germany's best stuntwoman." To be on the safe side, Miriam completed a classic apprenticeship as a sports and fitness merchant after school. At the age of 18 she was finally allowed to show her skills as a stuntwoman.

How Miriam could realize her dream at such a young age? In the interview she reveals: "I believe that goals are very important. Because they drive us. We first have to focus on where we want to go in the first place. I was always a girl who thought very boldly and very big. And my courage and ambition were correspondingly big." Miriam is convinced that you have to offer luck the chance to meet you. She says, "There are people all around us who support us. You just have to find them." She herself has always looked to elders for guidance, especially older men who were already where she wanted to be when she was younger. It was from them that Miriam could learn. In doing so, she was bold, forged ahead and had her sights firmly set on her goal.

But Miriam Höller also knows that goals are not everything: "It's this fighting and biting through that makes you proud later on. That's what makes you grow. And you also grow from failure. You are not rewarded for doing something, but for persevering. The more you struggle and persevere, the prouder you are when you get there. Then you get to the goal and realize: I'm going to get bored here quickly, I'm definitely not going to stay here. And then you set your next goal."

After Miriam joined the stunt team at the age of 18 and landed her first leading role within a very short time, she met Jochen Schweizer at some point. Miriam: "At that time, Jochen Schweizer opened a wind tunnel and was looking for a model who could fly in the wind tunnel. We shot the ad campaign together and he said to me, "You have the talent to portray danger aesthetically because you look like a model. Make it count!" And I did."

Miriam Höller's path led her to Germany's Next Topmodel: "I wanted to show Heidi Klum that you don't have to be emaciated and bitchy, but strong-willed and brave. On the show, I wanted to be rebellious and show that women can look like a model and still be neat." She experienced three exciting months - yet Miriam quickly realized that the modeling world was not for her. She didn't want to be judged just for her looks.

Miriam describes the modeling industry as difficult. Nevertheless, the show offered her a great opportunity to present herself and show her unique selling point. Her rebellious nature quickly put Miriam in the spotlight - which opened up the modeling world to her: "I earned good money very quickly after the show. As a model you earn a lot of money and don't have to do anything other than walk the catwalk. But I noticed that it was only the money that attracted me to it, but my lifeblood, namely the stunt world, fell away completely."

At the time, Miriam was already in a relationship with her partner Hannes. She says: "Hannes said the same thing as Jochen Schweizer before: "You have to make something of your unique selling point! You can present danger aesthetically." And so the idea of my fire wings was born. I put a large construct with steel wings on my shoulders. I wore these fire wings with a wingspan of three meters at a performance."

No one had ever seen the burning wings before. That was the breakthrough after which Miriam said: "I'll never work as a normal model again, but if I do, then for extraordinary advertising campaigns where I do something dangerous." After that Miriam was more successful than ever: she shot commercials with big companies, gave stunt workshops and founded her own stunt team.

Today is Miriam Höller ...solidified. She no longer needs external recognition in order to be happy and succeed. In the interview, she says: "Of course, I'm in an industry where elbows are out and there's a lot of competition. I didn't get many jobs because someone was always prettier, better or more intelligent. But at some point, you stop getting angry about it. You realize that it goes on anyway and that everything that comes along is somehow okay." Miriam Höller is convinced that things in life come the way they have to come. She knows, "At some point you get a routine in failing and go your way anyway. That's the Serenitythat you get at some point.

Miriam Höller: "My boyfriend and I were like Bonnie & Clyde"

Miriam's long-time boyfriend Hannes also loved action and was a full-time extreme athlete. She says: "Hannes was one of the first athletes to be signed by Red Bull. He was a climber, paraglider, base jumper and eventually became Red Bull Air Race Champion. When you're in your industry, you naturally get to know the very people who are doing the same thing you are. Hannes and I both quickly realized: We love danger and share a fascination with risk. We fell in love with each other full throttle and had a very great, very extraordinary, but also very exhausting relationship over six years."

Exhausting, because both lived outwardly a perfection. Miriam Höller says: "We were like Bonnie and Clyde - immortal. The stunt woman and the aerobatic pilot. Everyone was looking at us and we had to show on the outside that nothing could happen to us. We had sought each other out and found each other. Our job was to show people how great life was. That was our image - to always tell people that we had everything under control. We marketed ourselves through this hero status. But at home, we were just a normal couple with normal problems."

Miriam believes that everything in life comes as it should. She has faith in life and is firmly convinced that everything has a meaning - even if you may not recognize it at first. A great blow of fate hit Miriam in 2016 when Hannes passed away. In the interview she says: "2016 was our year. Everything was perfect: we were in tune and had worked out our relationship. We had actually achieved almost everything we wanted to achieve. Then a phone call came and it said: Hannes has crashed."

Miriam Höller lost her complete support and trust in life. She says: "I was always madly in love with life - and suddenly you live in a grey cloud full of self-pity. You hate life and have insane amounts of anger. The worst was the longing for Hannes. I didn't recognize myself anymore and questioned everything. You work so hard, fight for everything and then you get such a blow from life. It completely knocks you down. Everything has completely collapsed."

Hanne's tragic death was two years ago today. Miriam can now talk about it in a self-reflective way, but she doesn't want to forget the terrible accident. She says: "I am insanely afraid of forgetting how he smells, how he tastes, how he talks to me. It's one thing to learn, though: That setbacks happen to us in life. The only question is how you deal with it and where you put your focus."

Six weeks before Hanne's death, she broke both her feet in a stunt accident. She shattered her feet so badly that it was not clear whether she would ever be able to walk again. So within six weeks Miriam lost not only her life partner, the pillar of her private life, but also her professional life and all professional dreams and future plans. Miriam: "So then I sat in my wheelchair and didn't even know what to hold on to anymore."

But Miriam made a decision: although all the pillars of her life had broken away, she wanted to develop the strength to look forward. Miriam: "I was trapped in a grey veil for weeks. My mental and physical pain was unbearable. Then I wrote a list with pro and con arguments for and against life. I chose life and wanted to fight again."

Her environment motivated Miriam Höller to continue. She knows: "The people we surround ourselves with are very, very important! My environment has shrunk extremely in the last two years, but I only want to have open and honest people around me who have the courage to get this nagging out of me. Because life is beautiful. And that's a great value that I have now." In the past two years, Miriam has been able to recover and regain her energy. She appreciates life more today than she ever did before. And she will continue to face adversity proudly and strongly.

What are her plans for the future? Miriam: "I want to speak openly about what happened to me. I want to give people courage to fight and keep going. Currently I work as a speaker and do my jobs as a presenter. All the while, I stay true to my passions - action, adventure and cars." From the bottom of our hearts, we wish Miriam all the best on her journey.