The authoritative parenting style: advantages and implementation at a glance 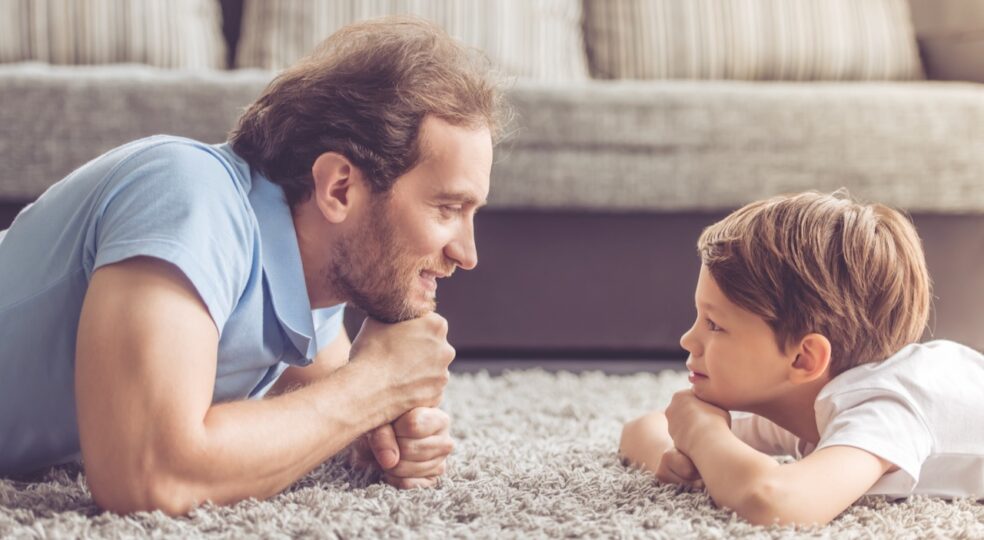 But what are the advantages of the authoritative parenting style and how can you implement it in everyday life? We would like to explain this to you in the following article.

Authoritative parenting style: what is meant by it?

The authoritative style of education is a democratic style of education, however, it is not anti-authoritarian education. The distinction from the latter concept is that there are definitely rules and limits. If these are not observed, the child must expect appropriate consequences.

However, unlike the authoritarian style of parenting, the authoritative style of parenting is characterized by warmth, caring and Appreciation shaped by the child's personality. The family rules are not arbitrarily dictated, but discussed and explained together. The same applies to the consequences. The child feels like a full member of the family whose needs and views are taken into account.

In addition, the children are given a certain amount of freedom to act and make decisions, which is definitely based on anti-authoritarian education. The child's freedoms are based on his or her age, i.e. they are continuously adjusted. The parents guide the education through respectfully formulated rules and expectations.

Authoritative parenting style: what are its characteristics?

The authoritative parenting style is characterized by the following six features:

As well as authoritarian and anti-authoritarian education, the authoritative style of education also brings with it various advantages and disadvantages. We would like to take a closer look at these in the following.

Advantages of the authoritative style of education

Independence and sense of responsibility

Children who are raised authoritatively are often more independent and responsible than their peers who enjoy an authoritarian or anti-authoritarian upbringing. This is due to the fact that the children not only have a certain amount of free scope for decision-making, but also have to deal with the consequences of wrongly made decisions.

Since parents consider their children as full personalities and take their opinions as well as wishes into account, a strong Self-esteem which is also an advantage later on in the job.

Ability to work in a team

As a result of the responsiveness (willingness to agree) practiced in the family, authoritatively raised children usually have no problems integrating into social structures. They treat their fellow human beings with tact, empathy and respect, as they have been taught this by their parents. Furthermore, they are extremely willing to compromise.

Authoritatively raised children experience a secure bond with their parents, making it easy for them to build trust with others later in life. The chance of having equal partnerships and friendships is high.

The authoritative style of education is neither characterized by rigid rules like authoritarian education, nor is it an almost rule-free concept like anti-authoritarian education. Authoritative education is characterized by flexibility, which makes it possible to always readjust the applicable rules as needed. In this way, the child receives age- and situation-appropriate guidance from the parents.

Disadvantages of the authoritative style of education

Despite all the advantages, we would like to mention the possible risks of the authoritative parenting style:

The concept of free development, which is aimed at by authoritative education, is considered questionable by critics. In practice, it often happens that parents do not let their children decide freely after all, in order to protect them from foreseeable negative consequences.

An essential feature of authoritative parenting is that any misconduct results in an immediate consequence. If parents take this too closely, disproportionate reprimands can occur under certain circumstances.

The implementation of the authoritative parenting style in everyday life: 6 tips

In theory, the concept of authoritative parenting sounds right to you, but you're wondering how to make it work in your everyday life? The following six tips should help you:

Call a family council where you all sit down together and discuss the rules for your harmonious life together. Both the adults and the children may express their wishes and expectations. It is best to put your rules in writing. It is advisable to create a poster with the family rules and hang it up in the home.

As a parent, you have a responsibility to explain to your child the difference between right and wrong. A child is testing his or her limits and cannot always know what behavior will cause harm to others. Therefore, you should clearly articulate what behaviors are unacceptable (e.g., hitting, kicking, biting, insulting).

For your child to be able to make decisions freely, he or she needs to know what consequences to expect. However, make sure that the punishments are proportionate and ideally related to the offense. For example, if your child pushes another child off the swing in the playground, the logical consequence would be that you leave the playground.

Your child depends on your emotional care to develop in a healthy way. Show your child that he or she is important to you and that you love them unconditionally. Never punish your child by withdrawing love, no matter what he or she has done.

Your child is constantly developing. For this reason, it is necessary that you adjust your parenting style accordingly. An older child should gradually be given more and more responsibility and freedom. It is also important to regularly reflect on the consequences to see if there is a need for change.

To learn to make good choices, your child needs ample opportunities to do so. Offer your child choices as often as possible: From choosing what to wear to whether to do homework right after school or late in the afternoon.

The authoritarian parenting style is characterized by strictness, high parental expectations, and little praise. The views and wishes of the children are subordinated to those of the adults. There is no democratic consultation, and the parents have the sole authority to make decisions. Almost until the middle of the 20th century, authoritarian education was common in many families.

Today we know that the authoritarian style of upbringing can have a negative impact on child development. Creativity and individuality are hardly promoted. The child's emotional needs are also only inadequately satisfied or not satisfied at all, because the parents do not act as loving caregivers but as strict authorities.

As a result, mental illnesses such as anxiety disorders, obsessive-compulsive disorders or paranoia can develop. Aggressive behavior is also observed more frequently in children raised in an authoritarian manner. This can be seen, among other things, from the following scientific elaboration out.

The authoritative parenting style offers a middle ground between authoritarian as well as anti-authoritarian parenting. As is so often the case, the golden mean between two extremes proves to be the most successful method of achieving the desired goal: In this case, it is, Children to strong and self-confident adults.

Since authoritatively raised children have to follow rules but are nevertheless granted a high degree of freedom of decision and personal responsibility, they shine in later life with Self-confidence and sense of responsibility. This is a great advantage in both private and professional matters.

Let's take up the aspect of professional advantages in a little more detail: Children who have been brought up authoritatively are best able to fit into existing hierarchies. In their childhood, they have learned to respect authority and rules and to behave accordingly. They are therefore rarely conspicuous for their rebellious behavior. The latter often suggests an anti-authoritarian upbringing.

However, children who have been raised in an authoritative manner are quite capable of questioning instructions and defending their own point of view. In doing so, however, they proceed with tact and respect.

Authoritative children are also open to the views of their peers, which makes them perfect team players. They are always on the lookout for constructive solutions and can work out compromises that are acceptable to both parties. The teamwork aspect is a basic requirement in many professions.

It has long been scientifically proven that childhood experiences have an influence on mental health and shape later behavior accordingly. Often, depression or anxiety disorders have their origins in childhood.

Researchers at the Friedrich-Alexander University Erlangen-Nuremberg, Germany, have now Study proves that the suicide rate in authoritatively raised children is significantly lower than in the general population.

The authoritative parenting style brings numerous advantages for both parents and children. This becomes especially clear when you compare authoritarian and anti-authoritarian parenting. Provided you implement the parenting style correctly, your children have a very good chance of growing up to be self-confident, empathetic and successful adults.

Of course, you will have to avoid some stumbling blocks along the way. The authoritative parenting style demands an immediate consequence after misbehavior, which is not always easy to implement in everyday life. If it concerns small things, it is recommended that you first of all relax and rethink the situation. Sometimes rules also need to be adapted.

In summary, it can be said that a stubborn educational concept rarely leads to success and can hardly be implemented consistently. The guidelines of authoritative parenting, coupled with a little composure, can offer you a good orientation to accompany your child in the best possible way on its way to independence.

The 10 best tips for
Fun and success in learning

In our free e-book you get 10 tried and tested tipsthat will help you to support your child in learning in the best possible way.
REQUEST NOW FREE OF CHARGE
Reviewed by Dr. med. Stefan Frädrich