Daniel Aminati: Why self-love is the key to happiness 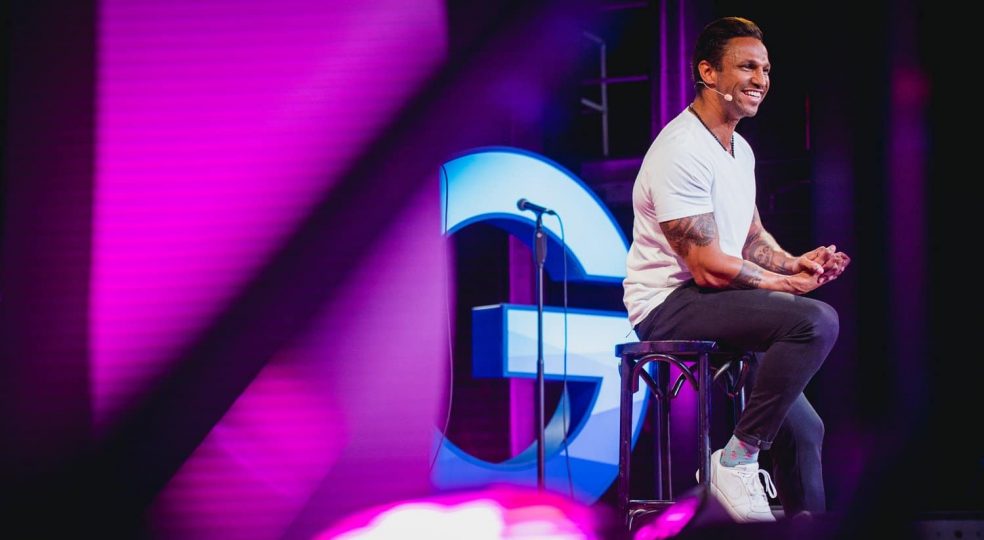 If life is a roller coaster ride of emotions, then sat Daniel Aminati already several times in the car and drove up and down the tracks at breakneck speed. The former boy band star, singer, dancer, actor and TV presenter is an entertainer with heart and soul. His heart beats for good entertainment. He loves to inspire people! But Daniel Aminati was not always as self-confident as he is today. The ups and downs of his life shaped him into the personality he has become. Away from the cameras and the spotlight, Daniel Aminati also has a thoughtful and vulnerable side. In the video you can find out how he managed to overcome his Self-esteem despite major hurdles, and why self-love is the key to happiness for him.

Daniel Aminati: "We all have our baggage to carry".

Daniel Aminati was the lead singer of the band "Bed & Breakfast" and already led an exciting and glamorous life in the limelight at a young age. But behind every story is a story. Today, the 45-year-old reveals: "We all have our baggage to carry. I was often scared and didn't like my life. And yet we can create wonderful things in our lives. Our past doesn't have to be our future. Because sometimes having your back against the wall isn't so bad. Because then all you can do is move forward."

Daniel Aminati was born in Aachen in 1973. He grew up with his three siblings in a family that lived in constant fear of the aggressive father's violence. Beatings were the order of the day. Daniel Aminati recounts: "My father beat me so badly with belts and chairs that it bled from my ears. I was about five or six years old at the time. My mother tried to protect my siblings and me. At some point we moved to a women's shelter and my mother divorced me. But we kids were traumatized."

Daniel Aminati lived out his inner rage, anger and insecurity with aggression: "I was very choleric and quick-tempered, just like my father. I behaved the way he had modeled for us for many years." At the time, the then ten-year-old felt no self-love. He was sent to a reformatory - the first of countless homes he was to visit. Daniel Aminati recounts, "My record from ten to 15 was twelve schools and three homes. I didn't graduate from high school."

But there was one bright spot in his life: dancing. And so, thanks to his hip-hop and breakdancing skills, Daniel Aminati managed to land a job as a backup dancer and set foot in show business. At 21, he became the lead singer of the band "Bed & Breakfast." Looking back, Daniel Aminati reveals, "It was the best class trip of my life. But success without identity doesn't last long." With a bloated ego, he eventually left the band to start a solo career.

But he who flies high, falls low. Daniel Aminati: "I lived like a big pop star, but the successes failed to materialize. As a result, I lived completely beyond my means. And it came as it had to come. One day the tax office rang my doorbell, and later the enforcement authorities. I was broke and had half a million in debt at the age of 24." Daniel Aminati took refuge in the intoxication: "I didn't feel myself anymore. There were moments when I was closer to death than to life."

But then came the turning point. The young adult developed a strategic 5-point plan that was supposed to steer him in the right direction like a fixed star or a navigation device. Daniel Aminati: "I rolled up my sleeves and implemented my plan." This included the following five points:

In addition, Daniel Aminati vowed one thing: If he ever became successful again, he would treat all people with more respect, including himself. He says: "It doesn't matter what's on a business card - a person is a person. We're all equal. And mistakes are okay too. I'm okay the way I am. We're all okay the way we are."

Self-love: The key to happiness

After his turbulent roller coaster ride, Daniel Aminati knows: "Self-love is why it really works. It's what moves you forward! At Self-love and your inner self-worth is what matters. Any status symbols are plagiarism if you don't live in harmony with yourself and your environment." And even though fear is the most natural thing in the world, many of our fears are unfounded. How we can solve them? With self-love and Self-confidence. Daniel Aminati: "We all have a story. But childhood or not - you are responsible for your happiness here and now!" So learn to love yourself. Reach for the key to Happiness and live the best you. The time to start is now!

So you finally become really self-confident

In just one and a half hours, learn how to improve your self-esteem through a simple coaching method.
PARTICIPATE now for free
Reviewed by Dr. med. Stefan Frädrich