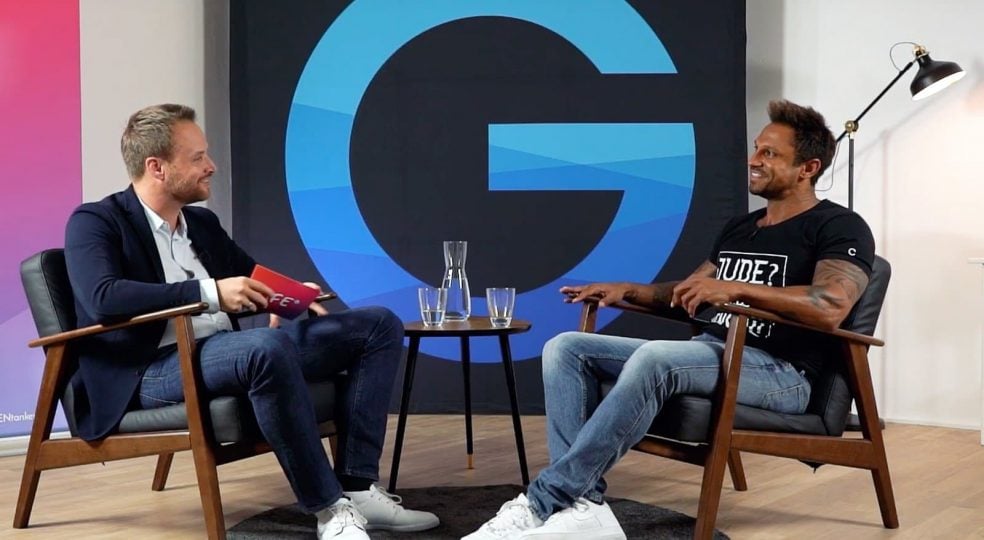 Daniel Aminati is an incredibly versatile person: He is a presenter, entertainer and can sing. But that is by no means everything. In an interview with Alexander Müller, the 45-year-old talks about his many talents and reveals how to successfully master many different things in life.

Daniel Aminati is a well-known presenter. He almost became a professional footballer and has a successful music career with over a million records sold behind him. How do you manage to combine so many talents? Daniel: "By being as old as the hills. I started performing on stage 30 years ago. My big dream back then was to become a professional footballer. We trained five times a week. But also dancing has always been absolute joy for me."

At the time, Daniel didn't have the concentration to focus solely on football: "My sisters and I were already very much on our own back then. I grew up mostly in homes from the age of ten - first it was a boarding school, then it was two reformatories. I went to twelve different schools and didn't have a vocational degree. So my life was very troubled. I didn't have the concentration in football and the other boys were ahead. It wasn't enough for me at the time."

Due to difficult family circumstances, Daniel Aminati tried to take on the role of father at an early age. He says: "At some point my mother was hopelessly overwhelmed. We had no money, she had four children to make ends meet. It wasn't all that easy. But that's my story: from the age of ten I went through the world alone. Maybe that's why I have so many talents. My DNA has always been: fight. I learned quickly: when I do something, I try to do it as well as I can." That's how Daniel was able to compensate for the lack of recognition from his family. As an entertainer back then, it was normal to host, sing and dance at the same time. Daniel: "I can do it because I live for the stage. That's why it's not a big show feature for me."

Ambivalent life as a pop star

Today, Daniel Aminati speaks very reflectively about his childhood and youth. He says: "Pain and suffering bring us further, because you can reflect on them. When you feel inner emptiness, you go deeper in and question yourself." He describes his time as a pop star in the boy band 'Bed & Breakfast' as interesting: "A lot of people want to get recognition. And then you get it and suddenly it bothers you. You become something you don't want to be. You threaten to become your own stereotype because people treat you differently, and you think you have to step into a role because that's what's expected of you."

As a young person from an unstable home, Daniel was overwhelmed at some point. He says: "You can't really appreciate success because it comes relatively suddenly. After all, you haven't worked your way up like, say, being an entrepreneur with your own company, but you sing a few nice songs and find yourself in pictures in magazines a few months later. It's very strange." At the same time, Daniel describes how he became disastrously accustomed to his new status relatively quickly: "You devalue the whole thing and don't develop any feeling. Your ego inflates and you lose yourself."

At some point Daniel left the boy band. In the interview he reports: "We were a cast band and had too little feeling and at the same time too little responsibility for each other. Everyone put the spotlight on himself and wanted to be the best. Our selfishness distanced us from each other. There were cat fights and that led to me quitting." A solo contract followed - but after two years Daniel was bankrupt. He says: "Debt counselling, enforcement agency - the whole nine yards. And suddenly I was back on my mum's couch."

Today, Daniel Aminati can describe exactly how he felt back then: "You couple your own value to success. Then success fails to materialize and you feel like a loser. Then, to somehow make ends meet, I sold sneakers and worked in a copy store." The fall from pop star heaven was deep. Daniel: "Then there's a point in your life where you have to make a make a decision have to. At some moments, I had no drive left. But I had my DNA - and that was my mantra."

In the second part of the interview, Daniel Aminati talks about the downside of his success, inner satisfaction and pain. He reveals why personality development has positively influenced his life and what tips he would give young people for orientation.