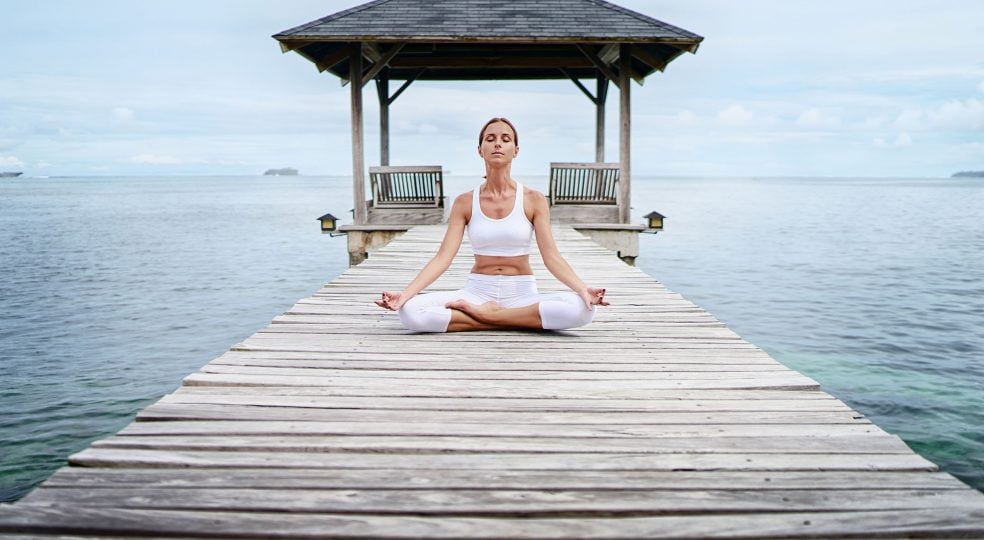 Our everyday life is becoming more and more hectic. The demand for relaxation methods is therefore growing steadily. In addition to yoga and autogenic training, the Meditation established as a popular relaxation technique. But not all meditation is the same. There are many different ways to meditate. A "right or wrong" does not exist in principle.

In the following article we will take a detailed look at "Transcendental Meditation", or TM for short. You have never heard of it? That's not surprising, because you won't find this meditation offer on the course schedule of your yoga studio.

What is Transcendental Meditation?

Whoever does it right slides into a state of complete Relaxation. Participants describe feeling an unprecedented sense of the inner peace and lightness experienced. Nevertheless, Transcendental Meditation is considered not entirely uncontroversial. This has several reasons.

Where does Transcendental Meditation come from?

Maharishi Mahesh Yogi passed away in 2008. However, Transcendental Meditation continues to be practiced by his followers.

How does Transcendental Meditation work?

According to followers of the TM teachings, it is not possible to teach yourself this type of meditation. While you can find numerous instructions for all other types of meditation on the internet and YouTube videos to follow, the exact technique of Transcendental Meditation is kept under wraps by its followers. From our point of view, however, there is nothing to stop you from trying it out with your own mantra.

Think of a word or a short phrase that in you... positive feelings ...to your mind. For inspiration, we would like to give you a few examples:

Of course, you can also use well-known mantras, such as the classic "Om" or "So' ham". The important thing is that your mantra feels good and right for you. After you have chosen your personal mantra, get into a comfortable sitting position and close your eyes. Be sure to wear comfortable clothing that does not constrict you.

Now feel deeply into your body and begin to speak your mantra. Whenever your thoughts wander, gently guide them back to the mantra. Meditate in this way for 10-20 minutes. Finally, sit quietly for a few minutes to allow your mind to return to the here and now.

Now what is the difference between TM and "normal" meditation?

At first glance, Transcendental Meditation does not seem to be very different from conventional mantra meditation. While in other meditation techniques you actively bring your body and mind to rest, in TM this is supposed to happen by itself. For the time of meditation, the mind is practically turned off like a light switch. What sounds scary is, according to TM teachings, healing.

Any attempt to inner peace to force is considered counterproductive. However, the latter cannot always be avoided. Beginners in particular often tense up when their thoughts wander. For this reason, TM devotees affirm that professional instruction from a trained teacher is essential to learn the technique correctly.

You will never find Transcendental Meditation offered as a course in your sports or yoga studio. The fact that its followers have created a real secret cult around TM distinguishes this meditation technique significantly from other meditation concepts. Some people are skeptical about the secrecy, others are curious about it.

TM: one of the most controversial types of meditation ever

Transcendental Meditation has repeatedly come under criticism in the past. This is less about the meditation technique as such, but much more about the cult around it. Critical voices accuse the founder Maharishi that it is a sect-like association. For example, one only receives concrete meditation instructions after paying a high admission fee.

Furthermore, TM followers are not only active in the field of meditation. The TM organization acts as an economically active company, for example, in the field of Ayurveda. The organization has changed its name several times. Since 2000 it has been operating under the name "Global Country of World Peace".

Besides meditation, the so-called "Maharishi Vedic Science" plays a decisive role. This is an esoteric teaching that deals with education, music and architecture. Maharishi's stated ambition is to create a more peaceful and happy society.

Critics point out that the entire TM teaching is based on the idea of an individual and is subject to their (arbitrary) rules. For example, the mantras assigned by TM teachers would have no personal value for the apprentice. Furthermore, the positive effects of TM meditation have been insufficiently scientifically proven. Especially controversial is the so-called "yogic flying".

Even if the cult of Transcendental Meditation may seem suspicious to some, the technique as such can bring advantages. We would now like to take a closer look at these:

The positive effects on body and mind

As with any type of meditation, Transcendental Meditation has a positive effect on the body and mind. Regular Transcendental Meditation leads to deep relaxation, which promotes stress reduction. Stress is known to be one of the most common triggers for physical and mental illness (burn-out, chronic pain, etc.). A Study by the Free University of Berlin clearly proves this.

Transcendental Meditation is intended to achieve an even deeper state of relaxation than deep sleep. Through this, further health-promoting effects are achieved:

There are definitely Studies and scientific investigationswhich confirm the health-promoting properties of TM:

As previously mentioned, Maharishi, the founder of TM, wants to contribute to a peaceful and happier society with his esoteric teachings. According to Maharishi, this goal could already be achieved if only a small percentage of the population would regularly perform Transcendental Meditation.

He concluded this based on statistics in medium-sized US cities: Where people meditated regularly, the crime rate dropped. He named this observation after himself: The term "Maharishi Effect" was born. Admittedly, this sounds quite presumptuous at first.

However, there is a certain amount of truth to it: Meditation works actually soothing. Those who feel inwardly calm and relaxed are less inclined to violence.

However, the Maharishi Effect, as Maharishi Mahesh Yogi interprets it, is not based on science.

A Critical View of Transcendental Meditation

One of the biggest criticisms of the TM teachings, besides the often criticized "cult character", is the lack of transparency. This contradicts the basic idea of meditation, which should be open to everyone. Whoever wants to know the Transcendental Learn meditation would like, must first pay a high sum for it. The cost of a basic course is about 1100,00 €.

Since it has not been proven that Transcendental Meditation offers significant advantages over other techniques, you should think carefully about whether you want to make this large investment. Ultimately, however, this is entirely at your discretion. To find out whether Transcendental Meditation is right for you, you can attend a free information evening in advance.

Furthermore, Transcendental Meditation is criticized for practices such as "yogic flying". Through the altered state of consciousness, the body is supposed to be made to float. You can imagine scientists pulling their hair out when they hear something like this. It is physically impossible for humans to float.

Is it worth learning Transcendental Meditation?

This question cannot be answered in a generalized way. It is an individual decision. Basically, meditation is something really good. Whether it has to be the Transcendental Meditation, we leave undecided.

If you're curious about what Maharashi's mysteriously held and spiritually inclined concept is all about, don't be afraid to make inquiries. However, there are many other inexpensive meditation options, such as our free Greator Meditation Challenge.

Are you interested in meditation? Then you should join our free Greator Meditation Challenge. Five different meditations await you over five days. You will learn to calm down and let go of the stress of everyday life. Not only in the moment of meditation, but also afterwards. Whether you want to reduce stress or help you fall asleep, everyone can benefit from meditating.

Are you curious about the Greator Meditation Challenge become? Then you can find more information under the following link. We are looking forward to seeing you!