Children of divorce - a happy childhood despite separation 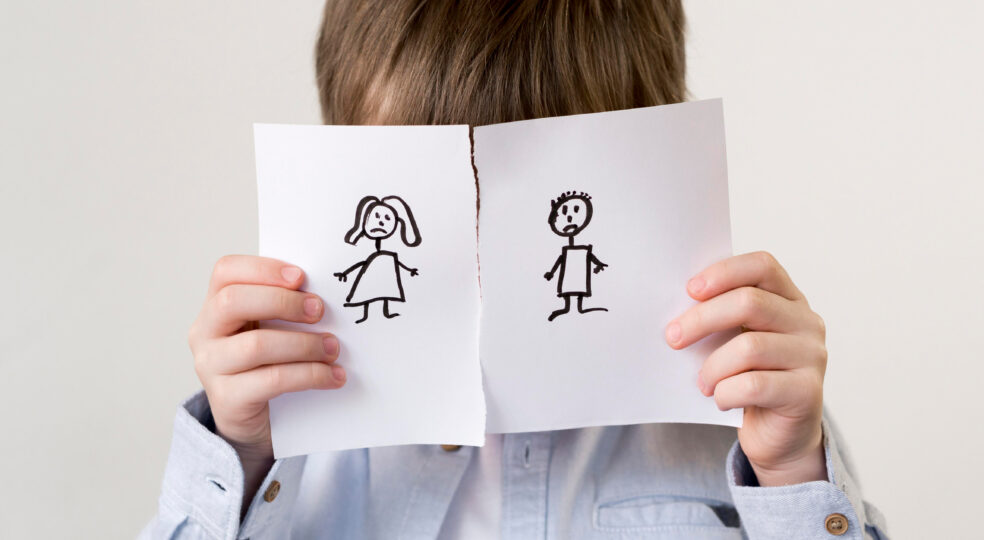 Whether the Separation becomes a trauma for children of divorce depends on how they experience the situation. The age or developmental stage also influences the reaction to the divorce. Some children have a more stable basic constitution, others are more fearful. Accordingly, children of divorce find it easy or difficult to adjust to the unexpected change in life circumstances.

The Relationship to both parents after the divorce has a strong impact on the personal development of the children. Not only the external separation plays a role, because often there is also an internal distance.
If both parents continue to work together for the benefit of the children of divorce, the separation process can be more easily managed. Whether it is a matter of educational issues, other decisions or simply the presence of the parents: children of divorce need closeness, Dear, attention and trust.

Common effects of divorce on children

The older the children are, the more they consciously experience their parents' conflicts. In such difficult phases, the children of divorce suffer enormously. They become a plaything. They often feel neglected. It is especially stressful for children who believe that they themselves are responsible for the situation. They feel torn apart inside and don't know who to stand by.

The children's reactions vary greatly. Some become angry and loud, others resign and withdraw. They feel guilty and helpless, become apathetic, excessively silly or aggressive. Psychosomatic illnesses and depressive moods are also typical consequences in children of divorce.

Slightly older children of divorce and adolescents compensate for this mental deficiency by focusing on special achievements, while others withdraw from their friends. Without the previous family structure, adolescents feel lost. They are at a point where home should be a safe haven. Instead - depending on the relationship between the separated parents - they feel like a pawn, a weight to balance the power relationships between mom and dad.

How you deal with children in a divorce

Making late effects on children of divorce Relationships in later life difficult. Children automatically interpret the situation they have experienced. But you can help your offspring not to associate a separation with pain, hatred or anger in the long run. To protect your children from trauma or psychological disorders, you can consider the following points:

When do I talk to children about the divorce?

It's difficult to find the right time to talk. No matter how old your children are, you want to protect them from this shock. After all, until a few weeks or months ago, you probably had a different vision of you as a family, of your life. You can learn to accept this serious change for the time being. Children also need the time you need. At the latest, when you decide to separate, you should let your child in on it. Otherwise, the changes will come too quickly, which will affect the Trauma effect tightened.

How do I explain the separation to the children?

It is best to talk about the impending separation together. That way, the children know that the decision comes from both parents. Focus on the well-being of your children. With young children, it makes sense to limit the discussion to the most important issues. Older children will ask more questions on their own and are interested in details. Answer the important questions, but don't overload children with too much information. Make them feel that both of you are always there for them.

You should avoid an argument during the conversation. There is also no place for accusations here: it is only about the message to the children. Reactions can vary. Some children seek comfort, others slam doors. Give children enough space to cope with the message. Regardless of their age, they need to be able to emotions let them out. It's similar to grieving for a loved one: Each of us deals with it differently. Whatever path your child initially chooses for himself: Always show them that you love them unconditionally!

Mom or Dad: Where do children of divorce live after separation?

Following a separation, both parents normally receive custody. This means that the parents make decisions together. There are two basic models for custody: alternating, i.e. changing custody, or custody by a single parent. In the second case, only one parent is responsible for the property and the place of residence.

Psychologists often recommend sharing responsibility for the children fairly. It is important that the parents are fair to each other. However, a painful separation leads to conflicts for the ex-partners and for the children. By being asked to make a decision, children of divorce feel pressured. On the other hand, a peaceful, out-of-court settlement of the points of contention eases the situation. Depending on the age of the child, you can also create your own model - just as the youngest ones would like.

9 tips to support children after separation

So that children of divorce do not feel abandoned or pressured, you should support them during a separation. The following tips will give you a good orientation.

If your children become silent or noisy bullies when you separate, these are clear warning signs. You may need professional help from a therapist or relationship coach. With this support, you can protect children of divorce from long-term consequences.

Maybe you had a bad experience yourself? In fact, children of divorce often seem to have relationship problems of their own later on. But not all children re-live the lives of their parents. Childhood experiences can also positively influence one's own behavior. Thus, the unhappy Child of divorce into a strong person who deals with problems constructively.

Divorce - a big change for the couple and their children.

Staying together only because of the children - this is not a good idea. All family members suffer as a result. However, divorce often causes a major upheaval. No wonder that for many children of divorce this experience is a Trauma means.

But if the parents behave prudently, the children get along reasonably well. Talking helps, as does dealing with each other fairly. The best interests of the child are an extremely important issue: everything revolves around protecting the children of divorce from problems. Silence and repression are not the solution: Instead, psychologists recommend talking openly.

At Greator you will learn a lot about individual Personality Development. As different as people are, they occasionally need help. The problems of children of divorce can be remedied with empathy and a sense of responsibility. In this way, even divorced parents can become confident and happy children have.