When world-weariness comes - be open to beauty 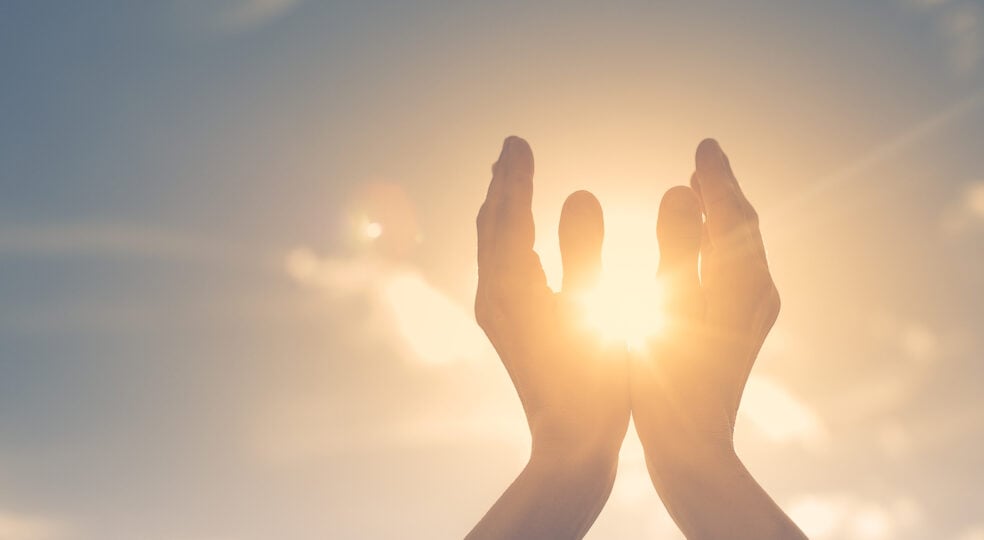 The bad news is driving you crazy. They are drumming at you from all sides: Politicians can't seem to find a solution and you feel overwhelmed by the negative things. The pandemic, climate change, hunger in the Third World, escalating violence everywhere - is there still a way out of the world's pain? Sometimes you feel like every single blow to the globe is hitting you. All you want to do is crawl away for peace and quiet. But news constantly makes your smartphone click or appears as breaking news on the TV screen.

On such days, you become aware of your helplessness. As a single person, you are too weak to change anything. On the one hand there is an overflowing compassion for the poorest, on the other hand you don't want to see it anymore. Your mood sinks lower than you have ever experienced before. Do you have to put up with all the suffering in the world? Wouldn't it be better to turn everything off and ignore the bad news?

Weltschmerz and depression seem to be closely linked. Many suffer from the omnipresent bad news. But there are also people who consider weltschmerz to be a luxury problem. Who has the time and peace of mind to constantly deal with the world's news? Or the energy to feel compassion and think about possible help?

With a few Tips you can overcome such phases of weltschmerz. It helps to give more weight to the positive side. There are not only bad things, but also beautiful things. You want to know how best to deal with negative stimulus overload? Then you should first learn the meaning of Weltschmerz.

In the early 19th century, the writer Jean Paul employed the term Weltschmerz to refer to the "enjoyment of suffering." Meanwhile, the definition of Weltschmerz refers to a certain kind of sadness and melancholy. What used to have a romantic touch is now more characterized by depressive, negative thoughts. Typical accompanying symptoms are sadness and resignation - always in connection with the "inadequacy of the world". Pessimism is just as much a part of it as escaping reality. Everything is crap - and you just don't want to see it anymore.

Interestingly, the German word Weltschmerz is also common in other countries. So if you hear Germanism in England, Denmark, or Spain, you know right away where you stand. In other languages, there is obviously no optimal Translation. Or is this simply an indication that Weltschmerz is rooted in German Romanticism?

Other poets and writers have also dealt with the term and sought a definition for Weltschmerz. Thomas Mann speaks of "wistfulness of life. Heinrich Heine writes about the pain that occurs when looking at the "transience of earthly glory.

Today, weltschmerz is considered a pessimistic feeling that encompasses helplessness and frustration. You see the reality around you and you could burst into tears. No wonder so many people resign and avoid the real world. However, a closer look reveals that feeling world-weariness is a very personal thing. Your own ideal expectations differ greatly from reality, and that's what makes the pain so bad. However, if you adjust your individual desires and expectations, the gap is no longer so great. This explanation shows you that you can do something about world-weariness - by changing your own attitude.

How can you deal with the suffering of the world?

You look at what's happening in the world and you get a tantrum. Earthquakes, flood disasters, poverty in many countries, dictatorships - all this makes you restless and spoils your mood. Reality seems to crush you: no wonder so many people are depressed or at least melancholic.

You are gripped by world-weariness. And that is no imagination. But it is a feeling - and thus just as difficult to control through reason as love and grief. If someone says, "Don't let yourself down, it's no use," that's of little help.

For psychologists and psychotherapists Weltschmerz is not a technical term. This is the difference with depression. Psychology understands Weltschmerz as a combination of several elements such as:

Your own inadequacy and that of the world gives you the feeling that you cannot change anything. This leads to inability to act and takes away your energy. But there is a possibility to turn the world's pain into something positive. However, thinking that others are much worse off and you are suffering at a high standard will not get you out of your slump. You need more than that.

When world-weariness leads to depression, you need professional support. However, the normal madness and daily mood swings can be managed on your own. Help you do this more Mindfulness and a turn toward the positive.

Looking at the positive cheers you up

When you go through life attentively, you don't avoid the many problems - yet you feel more awake than when you escape reality. This is important in order to cope with the world's pain. Live consciously and don't let yourself get too crazy. With the news flooding in from the internet and TV, it's hard to keep your head above water. That's why you shouldn't let yourself be bombarded by everything. Sift out the headlines: By actively deciding which articles you read, you strengthen your concentration.

Journalists and editors know the power of bad news: They simply have more impact than positive headlines. Defend yourself against this typical media effect and filter out the topics that are important to you - and that optimally spread good humor.

A theater group put on a little play in the park and received a generous, anonymous donation for it - a dog was rescued from the canal - the roses are blooming especially profusely this year - little highlights like that make people smile. They don't change the bad things in the world, but they show that there is also a lot of good.

If you want to better deal with melancholy and world-weariness, a gratitude diary will help you. In it, you record your grateful moments. This way you can later read about all the good things that happened. Concentrating on the good things makes you more mindful and happier. This is also shown by a Studyconducted by psychologist Robert Emmons. In it, the positive effect of gratitude diaries is proven. People who are aware of their grateful moments are conscious, feel more vital and optimistic.

More gratitude and Joie de vivre - Robert Emmons has done a lot of work on this, and is using it to counter world-weariness. You can benefit from it: Start with your personal gratitude journal and strengthen your optimism. The effect is not limited to feelings: your health also improves. This is certainly due to the fact that satisfied people live healthier and more active lives. As a result, they suffer less often from headaches and other ailments.

The meaning of Weltschmerz is one thing. Finding triggers is another. Is it simply the overwhelming number of events in the world that depress you? Sensory overload is certainly one of the big causes. Especially in our digitalized age, the flood of news is almost impossible to turn off.

But what are you supposed to do? You can't just shut everything down! You have to be informed, after all you are interested in political and social events. The problem is that more and more bad news is hitting you. This makes it difficult for you to keep your distance - whether it's a hungry child looking into the camera or crowded clinics on the screen.

Typical triggers of Weltschmerz are:

You find it difficult to bear the sight of suffering in the world and may feel a certain burden of responsibility as a result. This continues until you come to terms with your own political stance. The thoughts on the Transience and about your own mortality are also stressful. You don't want to keep thinking about the natural course of life and the inevitable end. Whether you are a believer or not, it is difficult enough to think about your own death. However, when you think about all of humanity, the great sad melancholy comes.

Carrying on as usual won't work for much longer. Climate policy in particular requires a rethink. And the pandemic isn't making it easy for us either. What's worth fighting for? How much energy do you have left? Will you overcome your world-weariness or give in to it? Whether and how you can fight against it depends on your very personal triggers as of.

3 steps to better deal with world-weariness

There are various tips for dealing with world-weariness. Avoidance is hardly possible and ends in an escape from the world. The following steps will help you stay in reality and still feel better.

Bad events, especially when they are injustices, are difficult to accept. You don't want to agree with such suffering. But acceptance does not mean that you approve of something. You are only acknowledging that you cannot change this reality. When criminals are acquitted or dictators become more powerful, that can't be good. You feel burdened by it - but you have no possibility to do something against it. At most, you can start a demonstration, which is at least a way to make your opinion known.

To get your find inner peaceIn any case, you can't avoid acknowledging the problem. You can't deny the bad things. Accept your world-weariness yourself and withdraw for a while. You don't have to be in a good mood all the time, but you can also acknowledge your pain. This little time out reconciles you with yourself and protects you from too much stress.

You may feel powerless in the face of global problems, but each person can make a difference, at least in small ways. How about sponsoring a child growing up in the Third World? Or would you like to volunteer? Sustainability also calls for personal commitment: pay more attention to what you buy. Keywords like fair trade and regional producers make you think: Where does the food come from and who produced the clothes?

Bad news floods you with its sheer volume. Horrible news often shows up in the catchy headline. Don't keep checking the latest news that pops up, turn off push notifications. That way you gain more control over the information. You can't read through all the messages anyway. Go offline sometimes. Or focus on the facts: There are also factual reporting.

With these tips, you'll learn to deal with the occasional world-weariness. Don't let it get you down too much, even if you sometimes believeto fall into a black hole. Strengthen your mindfulness and deactivate the permanent news. This will bring you forward in life and make you a relaxed, satisfied personality.