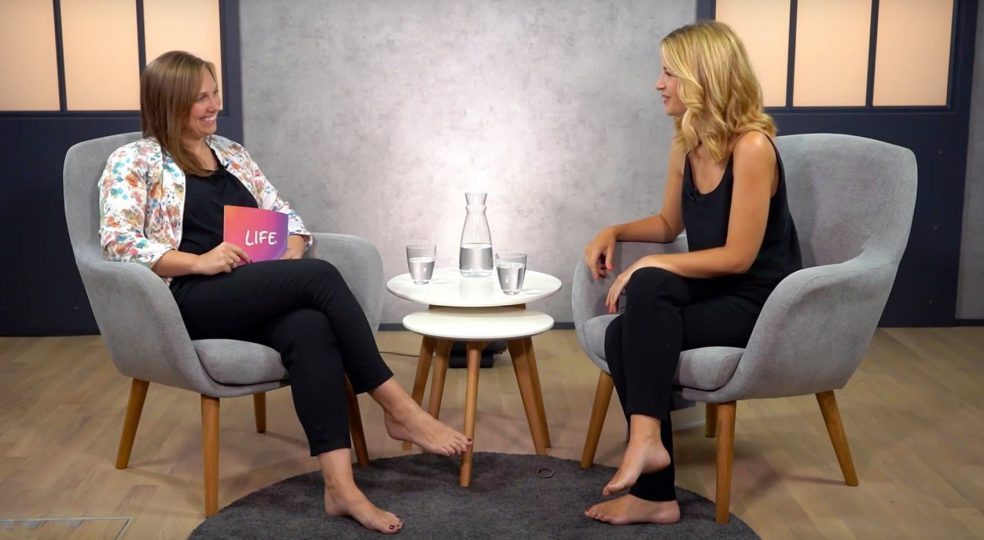 At LIFEfest 2019, Susan Sideropoulos was on stage as a presenter and thrilled the audience. The event was extremely short notice: Because the originally scheduled presenter fell out due to illness, Susan Sideropoulos spontaneously stepped in one day before. She says: "That was totally crazy! But it suited my life situation extremely well. I would have been there anyway, because I had given my husband tickets for his birthday. So we were preparing for the trip to Munich for the LIFEfest anyway, and then the request to host came one day before."

In order to accept at such short notice, Susan Sideropoulos had to throw some of her principles overboard. In the video she reveals: "I couldn't prepare perfectly and didn't know all the speakers. Therefore I immediately Laura Malina Seiler whose coaching I had previously completed and who changed my life dramatically. Laura came to speak at LIFEfest and encouraged me and talked me through it. And it was the best decision! It was unbelievably wonderful and one of the best jobs I've ever taken on."

The 38-year-old loves to present topics that she can identify with. For years, these were music shows and surprise shows. She reveals, "Topics with love and family are simply my world. That's where I'm really authentic." But for many years she has also been involved with personal growth, which is why LIFEfest was a perfect fit for her current life situation. Susan Sideropoulos: "The LIFEfest was also so beautiful because the audience was so great. It was just magical!"

Her personal journey into personal development began over ten years ago: "We went on holiday to Thailand at the time and I wasn't feeling well. I really wanted to get pregnant, but it just didn't work out. A very good friend of my husband had given him the book "Now! The Power of the Present" by Eckhart Tolle. We both read this on vacation, which changed a lot of things in my life. My husband read this book, understood it and has been living it ever since. I was only half into it at the beginning though. Because after I really actively engaged with it, I realized that I was only living it theoretically in the beginning."

Susan Sideropoulos: "Your life works for you"

More than ten years ago, the book triggered something in Susan Sideropoulos that she can still describe today: "I gained confidence in the moment and learned that things come the way they are supposed to. Life doesn't work against me, it works for me. It showed me at the time that it didn't seem like it was the right time or that I wasn't really open to taking a new step. And at the time, I was really working extremely hard and thinking I could somehow master everything at the same time. There was a lot going on and I was driving myself mega crazy. The book helped me understand that."

But in life it can always happen that you get lost. Susan Sideropoulos: "It happened to me again in the last two years. I didn't really know what I wanted anymore and whether I actually enjoyed it all that much. My industry is quite treacherous and superficial. I've worked hard and been very lucky. A lot of positive things have come up, but still, sometimes you drive yourself insane. It's hard to step back from it and not take things personally. You feel like you're constantly under scrutiny and everyone is participating in what's going on. Everyone is giving their opinion and judging you. That's why I've decided to work a lot harder on personal growth."

"Listen to your Gut feeling"

Susan Sideropoulos lost her focus on positive things and concentrated for a while on what was going less well. She says: "At some point I understood that nothing outside was blocking me, but that I was my own blockage. I was doing skip acts that maybe weren't so smart and distancing myself from jobs because I thought I had to do it that way. Head-wise, I thought it was right. But it just didn't feel right. I had to reorder myself."