Karsten Stanberger: "Design your own life without regret!" 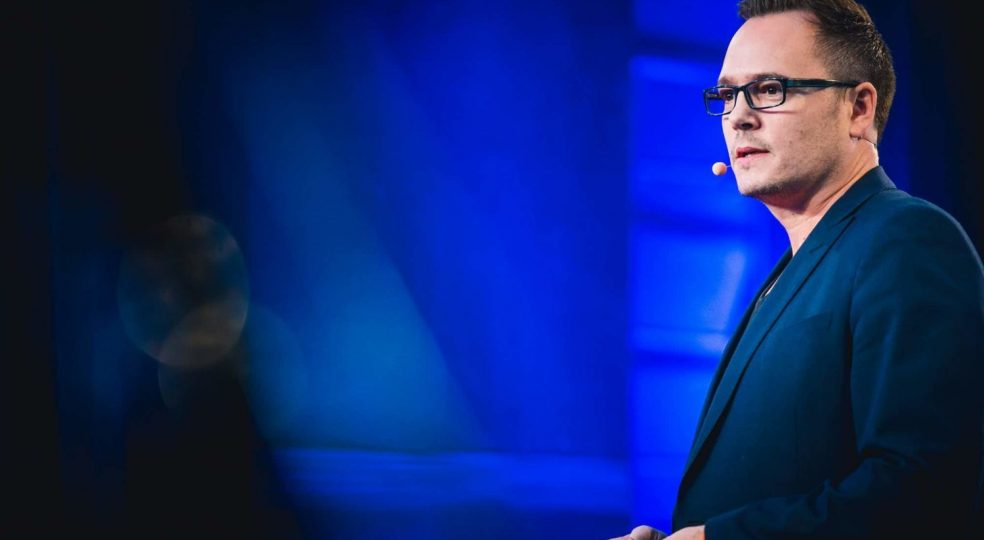 Why should I brush my teeth if I'm going to bite the dust anyway? "This question has turned my life upside down. And I'm sure this question has the power to change your life too," claims Karsten Stanberger. The speaker appeared at the speaker night at the Volksbühne am Rudolfplatz in Cologne. His heart's desire: to move you from "that's just the way it is" to a very personal "that's the way it should be for you".

"The year is 2014. I'm in Switzerland as a personal development trainer. In the evening I sit with the participant and we watch the World Cup," he says. "It's playing Italy-England. Even though I'm sitting there with the people, I'm all about me. In my head, I'm going over the conversation I had with a colleague. He told me the night before that a neighbour's boy had leukaemia. The little boy refused to brush his teeth and kept shouting, "Why should I brush my teeth when I'm biting the dust anyway?"

Powerful questions for your personal development

The power of this question had a long lasting effect on Karsten Stanberger and his wife Susen. That was the initial spark for their book "The Grass Biter Gang". "We wanted to know if there were more such powerful questions from sick children. We spent almost three years researching, talking to children, parents and parent orphans. And I will never forget the visit to a children's hospice. There, we were also shown the goodbye room. With a blue bed. Beautifully furnished. My wife and I perceived the room as very harmonious. It was as if the border between death and life was simply blurred there. Still, it thinks in me, that room shouldn't exist." Karsten wipes the tears from his face.

In the evening, he and his wife tell their children about the trip. Karsten's then 5-year-old son says: "Dad, I want a bed like that too. Not to die in. But you yourself always say 'Blue and white for life'! Dad, this is Schalke...!" Karsten decided two things that evening:

The trainer's bench and dressing room have been really great for me. But not spending my time only on the things that make it really valuable."

demands on your life

There are so many areas of life. Whether it's career, friends - all the things that take time. "For me, my family is one of the most important things in the world. Of course I would like to spend more time with them. The fact that this doesn't always work out without sacrifices creates pressure for me. On top of that, there's the feeling of wanting to keep up. To be comparable. Suddenly I'm becoming more demanding. Not only for myself, but also for my life. I'm probably not the only one," the speaker says openly.

One in six people die before reaching the age of 65

"We come into this world. We go to kindergarten, to school, learn a profession and go to work. All the things for which there is no room, we put off until later. Only what if there is no later?" asks Karsten. According to a study, one in six people in Germany currently die before reaching the age of 65. "The most common request from children to us adults is, 'Hey, play with me!' And how often do I, as a father of three, catch myself saying: in a minute. And that often turns into later. There's a study that shows that over 12 years of our lives, 365 days a year, we watch 24 hours of television. Nine months we play with our children. Maybe we'll regret that at the end of our lives. We know that now. We still don't change anything."

But there is a way you can change that. "We have spoken - with some distance - to parents who have lost their child. They confided in us: 'The child's death was a gift to our lives!' I first had to understand this statement. One father explained to me: We had to experience how our first child died much too early. And when the second child is born, it is discovered that this baby also suffers from a rare hereditary disease. The couple adopts a third child. They later learn it is autistic. The father told me: "When our son died at that time, we would have given anything to be able to trade places with the problems or the lives of others. Today I say, "I don't want any of that."

Create your own life without regrets

It's the lack of time that makes you look razor sharp at what really matters in the end. You don't have to lose a child for that. But change the attitude towards your own life and your own finiteness. That's what makes the difference. There are two ways to deal with this:

Why should I brush my teeth if I'm going to bite the dust anyway? " Or a 5-year-old girl who said, "If I were king of Germany, I would make sure no more children died. These questions from these children about their own lives and deaths, are a legacy. They have the power to help each of us answer the existential question - Does this all make sense? - clarity," Karsten knows from his own experience. "Within us grows the strength and courage to shape our lives around that, to shape ourselves."

Of course, we are moving in a field of tension right now. Between "that's just the way it is" and "that's the way it should be". There are phases in life where it is perfectly legitimate to say: That's just the way it is - if you know what for. Attitude, you can change. That takes repetition and time and remembering in the moment. But our lives are not repeatable. Karsten Stanberger asks, "Why isn't there something that doesn't permanently remind us?"

Become the designer of your life

"We have a French bulldog. A rather comfortable and lazy dog lying in his basket. There is one exception. When the doorbell rings! Then he runs to the door and barks. Why does he do that? He can't help it. Stimulus and reaction. I think it's the same with us humans. Except that between stimulus and a reaction from us, we have a chance to open up a little stretch gap of time. By hitting a pause button and asking ourselves, do I even want this? And then we go from being participants in the moment to being creators."

"Stay alert for every single moment!"

At this moment, Karsten Stanberger tells of meeting a family. "Their son always came home at lunchtime with a racket, threw open the door, threw his satchel into the corner and threw his shoes after it. And the same discussions followed every day," he recalls of the conversation. The son dies when he is nine. Since then, his parents have been throwing his school bag and shoes into the corner. Just to remember the sound. "In the hunt for the really big moment, we overlook the opportunity, the happiness in every almost mundane moment. In the end, it's those moments that we miss the most. I wish you strength and courage to discover your time value. Stay alert. Keep your eyes open. For every single moment!"