How to recognize bullying and counteract it in time 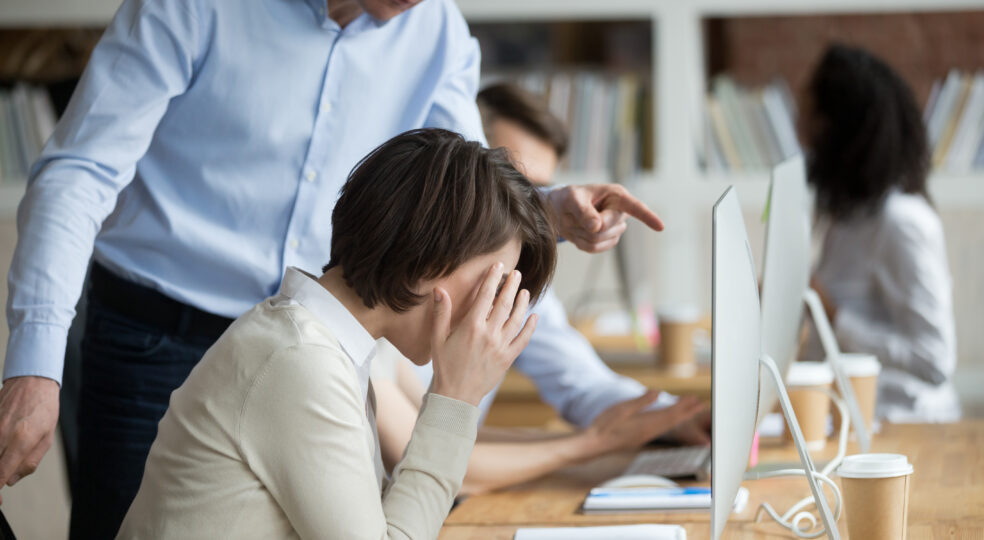 Bullying has many faces and can affect people of all ages. Sometimes it is difficult to recognize bullying attacks as such, as they can be not only offensive but also subtle in nature. For those affected, there is massive pressure to suffer in any case. It is therefore important to seek help in good time.

Mobbing is a widespread problem in many German companies. According to a representative Study of the Viking Raja Group in cooperation with the polling institute OnePoll, 60 % of 1,000 employees surveyed said they had already been the victim of bullying attacks in their professional lives.

Even though bullying is a serious problem, you should never use the term lightly. Not always when you feel unfairly treated or not sufficiently respected, you can immediately speak of mobbing. By definition, bullying in the sense of labor law only occurs when the following conditions are met:

If a colleague calls you an "idiot" or something similar on a one-off basis, this is not bullying. However, if the person uses humiliating nicknames on a daily basis and encourages other colleagues to do the same, this is definitely bullying.

There are many examples of bullying, especially in everyday working life. Below we would like to give you an overview of possible bullying situations:

The most common types of workplace bullying: how to recognize that something is wrong

As mentioned at the beginning, bullying does not necessarily have to involve open hostility, although this does of course occur. However, it can also involve secret intrigue against a particular person. In this case, it is particularly difficult to identify bullying.

Both overt and covert attacks are deeply hurtful and often even traumatic for the victim:

Criticism is part of professional life and is even indispensable. The prerequisite, however, is that it is voiced objectively and constructively. However, a one-time verbal bashing by a colleague or supervisor is far from being bullying. Especially not if you have really made a very annoying mistake.

However, the line to bullying is blurred. If you repeatedly have to hear how incompetent you supposedly are, so that no one wants to work with you anymore, you should not accept this silently.

Insults can be expressed directly as well as being conveyed to the victim through several channels. What is considered insulting is at the discretion of the victim and must be respected in any case. It is irrelevant whether the offender perceives his statement as "not so bad" or even as true.

Another issue in many companies is the so-called "grapevine". This cannot be completely prevented, but as soon as dishonorable rumors are deliberately spread, this is considered mobbing.

Sabotage is considered one of the most extreme forms of workplace bullying. In this case, an attempt is made not only to harm the victim psychologically, but also to bring about consequences under labor law. In order to achieve this, important information is not passed on, for example, so that the mobbing victim cannot even perform his or her work properly.

Some bullies even go so far as to hide or destroy important documents and make it look as if the victim has breached his or her duty of care. The difficulty for affected employees is often proving such suspicions.

Violence can be both psychological and physical. Psychological violence includes defamation, systematic exclusion and threats. We have already dealt with this.

One would think that physical violence in the workplace would be impossible to overlook and thus easier to combat. However, very few bullies physically attack their victims in the presence of witnesses. In most cases, the approach is so subtle that it is impossible to prove whether it was intentional or accidental.

The main causes of bullying at a glance

Bullying always occurs where many people (have to) act together in a confined space. Schools and professional environments, as so-called coercive communities, are predestined for the development of bullying situations. Competitive thinking, antipathies or disputes can be causal factors.

As a general rule, bullying cannot be excused. Nobody deserves it! Not even if he or she has made himself or herself unpopular with colleagues through some action.

The perpetrators often appear very dominant. However, this is a facade that serves to cover up their own self-doubt. Bullies often suffer from a very low self-esteem, which they enhance by bullying supposedly even weaker people.

By the way: In research, bullying is considered a group phenomenon. In addition to the perpetrator, there is a need for bystanders and followers. A perpetrator alone, who receives no support - even if only by looking the other way - could never act in such a transgressive manner against another person.

What consequences can bullying have for those affected?

Those affected suffer severely from the consequences of bullying. Children who have been bullied at school not infrequently have a Problems with self-confidence throughout life. This is clear from the Reference book "Bullying in schools by Dr. Matthias Böhmer (graduate psychologist) and Dr. Georges Steffgen (professor of social and work psychology).

But adults also suffer immensely. Bullying at work does not only extend to the hours in the office, but affects the person as a whole. Many victims feel worthless, helpless and guilty because of their situation. The consequences are not only psychological, but can also have a physical impact. For example, numerous victims of bullying complain of the following physical side effects:

Unfortunately, quite a few employees resort to medication or alcohol to combat the unpleasant symptoms. The desire for short-term freedom from worries is perfectly understandable. However, addictive substances do not solve the basic problem, but lead to a worsening of the situation in the long term.

Important to know: Once you have become a victim of bullying, you by no means have to be A lifetime in the role of victim persist. This also applies to bullying experiences in childhood. If, as an adult, you actively decide to work through the negative experiences and strengthen your self-esteem, the Overcome trauma. This is best achieved with therapeutic help or in a Coaching.

What can you do to prevent workplace bullying?

Unfortunately, bullying situations in the workplace cannot always be avoided. This makes it all the more important to respond to them adequately.

What can you do if you are affected yourself?

Nobody can and should put up with bullying: not even you! Depending on the type of bullying and how severe it is, there are various options.

Documenting the incidents is always reasonable. The burden of proof that it is actually bullying lies with the victim.

2. ignore or go on the offensive?

In rare cases it is enough to ignore the attacker. If his attacks come to nothing, he ideally loses his pleasure. In practice, however, this method is not always successful. Nevertheless, you can try this way for the time being. If the attacks do not stop, you should quickly go on the offensive: Talk to the perpetrator (first in private) about his behavior!

Tell him or her clearly that you will not put up with this any longer. If there is still no improvement, you should inform trusted colleagues and contact the works council. When the perpetrator realizes that you are no longer alone, his or her courage will fade. Don't be afraid to inform your boss in an emergency. As an employee, your boss has a duty of care to you!

If this is still not enough, then point out to the aggressor that you are not afraid to take legal action. Bullying is a criminal offense!

If the bullying attacks become too serious, then it may make sense to look for a new job. You may be crying out inwardly as you read this: If I quit, the perpetrator will have his Target reached! However, you must not look at it that way. No job is worth risking your health. Do you really want to stay in a company where such a negative climate prevails?

As a manager, what can you do about bullying?

As a manager, you have a duty of care to your employees. If you learn of a bullying situation, must go to you must intervene. The following procedure is suitable for this:

1) Talk to the perpetrator: Make it clear to him that you, as the boss, will not tolerate his behavior. The employee concerned is not involved in this process.

2. clarify the causes: How did the bullying situation come about? What are the underlying unspoken conflicts? What can you do as a manager to increase the general job satisfaction in the team again? In order to find this out, it makes sense to have both one-on-one discussions and team meetings.

3) Show the consequences: If the offender does not change his behavior, then act according to the escalation dramaturgy. This consists of admonishment, warning and termination.

4. support your bullied employee through an internal transfer or leave of absence, if possible.

If you reach your limits, seek external help in time (e.g. dispute mediators or supervisors).

Bullying cannot always be avoided, but it can be effectively combated. It is important that you find your way out of the victim role or, in the best case, do not take it on in the first place. Face the perpetrator with self-confidence and do not remain alone with your problem! Only if you actively ask other people for help will you receive it.

If you yourself observe bullying situations, do not look away, but offer your support to the person affected - even if it is only as a witness. As a manager, you are even obliged to prevent bullying in the workplace.