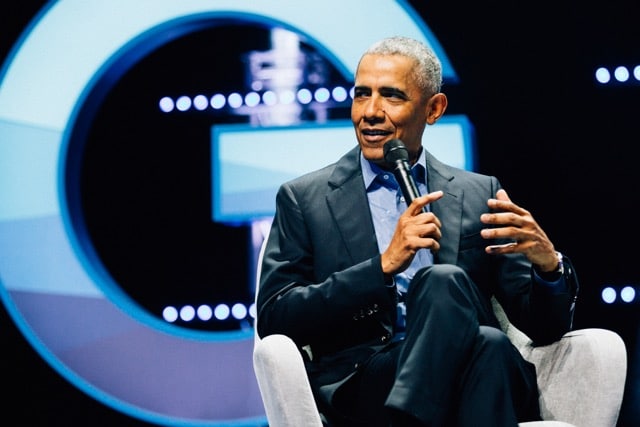 Cologne, April 4, 2019 - The ability to lead is not only important for winning election campaigns. Leadership skills are needed above all when it comes to implementing goals. And the goals that need to be achieved for a progressive and peaceful future for humanity require decisive leadership from inspiring individuals who lead the way. That Barack Obama is undoubtedly one of the most charismatic leaders of our time, the 44th President of the United States of America left no doubt about that on Thursday evening in Cologne's Lanxess arena, which was packed with 14,000 people. At the GEDANKENtanken World Leadership Summit, he fielded questions from the moderator and speaker for an hour in front of an enthusiastic audience. Cristián Gálvez.

Further keynotes were held by the American bestselling author John Strelecky ("The Café at the End of the World"), the investor and author known from the start-up show "Die Höhle der Löwen" (Vox) Frank Thelen and the journalist and management trainer Sabine Asgodom. In addition, the top coach Dieter Lange and the management trainer and leadership expert Boris Grundl. One of the highlights of the event was not least the performance of Dr. Auma Obama. The sister of the ex-president is an internationally renowned keynote speaker and is considered a pioneer in sustainability issues. Her Auma Obama Foundation Sauti Kuu will benefit from a generous donation from the proceeds of the "Golden Circle Dinner" with Barack Obama, which took place on the same evening before the GEDANKENtanken World Leadership Summit. Dr. Auma Obama accepted a check from the hands of GEDANKENtanken's founder, Dr. Auma Obama. Dr. Stefan Frädrich and Alexander Müller. True to the company's motto "Take you further", GEDANKENtanken supports a foundation that has set itself the task of making children and young people from socially disadvantaged families aware of the strength of their own voices and their own potential. By the way, "Sauti Kuu" is Kiswahili and means exactly that in German: "Strong voices".

The audience at the GEDANKENtanken World Leadership Summit also included 2,000 holders of the "Ehrensache NRW" honorary activity card introduced by the North Rhine-Westphalian state government together with cities, districts and municipalities. In line with Barack Obama's wishes, the organizers had granted them free admission to the event.

"It was a great evening that inspired many people and will have an impact on them far beyond this day," said Dr. Stefan Frädrich. "Barack Obama, but also all the other protagonists of this extraordinary night of speakers, have made it clear that leadership is not a question of lonely decisions by a few, but rather a great community project in which the participation of many is of decisive importance in order to realize the goal of a progressive and peaceful future for humanity."

"From the announcement of this event to its implementation, just four weeks have passed," says Alexander Müller. "The fact that we were able to convince so many people with our program within this short period of time that it is worthwhile to be at the GEDANKENtanken World Leadership Summit made us very happy. After our big sold-out speaker night, which also took place in the Lanxess arena last November, people obviously had the confidence that our major events stand for quality and sustainable experiences. It fills us with pride that we were able to offer a full arena to our protagonists, first and foremost Barack Obama."

By the way, all non-German speaking contributions of the evening were translated simultaneously and comprehensible for the entire audience. The GEDANKENtanken World Leadership Summit in the Lanxess arena in Cologne was organized by Klaus Ulrich in cooperation with GEDANKENtanken.