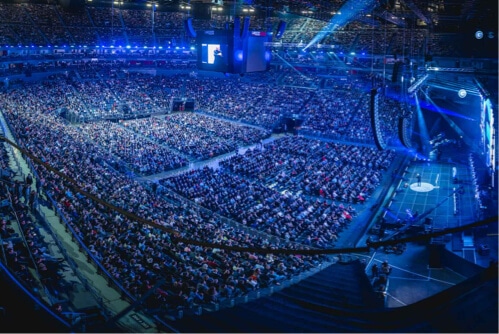 At the speaker summit on April 4 in the Lanxess Arena in Cologne, Barack Obama will appear in front of a sold-out audience. As part of the event, GEDANKENtanken has also invited the holders of an honorary work card "Ehrensache NRW" to take part in this premium event. In recognition of their civic commitment, a total of 2,000 volunteers will receive free admission.

Cologne, April 1, 2019 - Looking ahead to his appearance at the GEDANKENtanken World Leadership Summit in Cologne's Lanxess Arena on Thursday, he may be Barack Obama can look forward to a full house: 12,000 tickets have already been sold. In keeping with the spirit of the former US president, the organisers have also offered 2,000 holders of the "Ehrensache NRW" honorary activity card, introduced by the North Rhine-Westphalian state government together with cities, districts and municipalities, free tickets to attend the event. The response has been enormous: the majority of these honorary tickets are already sold out. Irrespective of this, there is still a contingent of tickets available at the box office for those who make up their minds at short notice and present their Ehrenamtskarte.

Elfi Scho-Antwerpes, First Deputy Mayor of Cologne and member of the GEDANKENtanken advisory board, has supported the free access for honorary activity card holders and emphasizes: "It is great that volunteers are included in the event in this way. Whether they are coaches at a football club or helpers at refugee shelters, these people ultimately do valuable work for society as a whole in many places in our country by working tirelessly and unpaid for others. This is now an excellent opportunity to say thank you to them. They deserve our appreciation."

"We want to make this event, which features Barack Obama live, accessible to people who have made special contributions to the community," said Dr. Stefan Frädrich, founder of GEDANKENtanken. "That is also the reason why we have made 2,000 tickets available for volunteers. This campaign is not least in the spirit of Barack Obama, who is very committed to the topic of 'community building', and that's what volunteering is all about."

"We are very pleased with the advance ticket sales," said Alexander Müller, CEO and co-owner of GEDANKENtanken. "To have sold over 12,000 tickets in just four weeks is rather unusual and really a great success. Usually an event like this has at least a year's lead time. At the last event, the sold-out big speaker night also in Cologne, it was even one and a half years. In the last few days, and especially on the weekend, advance sales for the GEDANKENtanken World Leadership Summit have really picked up again. We are very pleased to have a really full arena and to be able to do good through our campaign for the holders of the Ehrenamtskarte."

At the GEDANKENtanken World Leadership Summit, numerous other renowned visionaries and decision-makers will appear and give impulses for a progressive and peaceful future, among them the American best-selling author John Strelecky ("The Café at the Edge of the World"), the Bonn entrepreneur Frank Thelen ("Die Höhle der Löwen") and the key note speaker and pioneer in questions of sustainability Dr. Auma Obama. By the way, non-German speaking contributions will be translated simultaneously and comprehensible for the entire audience.

The GEDANKENtanken World Leadership Summit on April 4 at the Lanxess arena in Cologne is being organized by Klaus Ulrich in cooperation with GEDANKENtanken. Only a few tickets are still available in advance at www.eventim.de and at the usual ticket agencies. Exclusive VIP and box seats are also available.