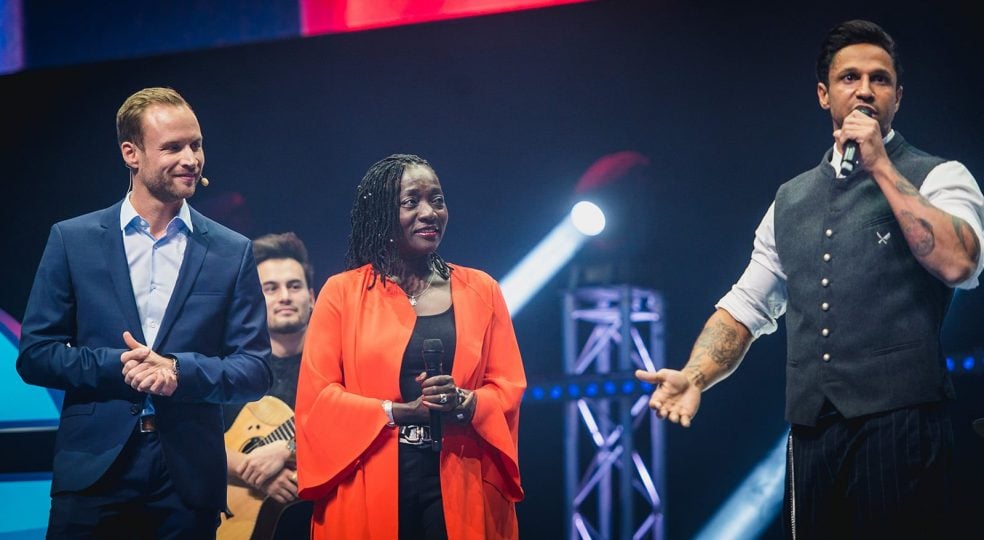 For Christmas, the Cologne-based training start-up is launching a fundraising campaign for the benefit of Sauti Kuu, the foundation of Dr. Auma Obama. A delegation from the company has already visited Kenya with presenter Daniel Aminati to see the work being done there.

Cologne, December 12, 2019 - At the big Cologne "GEDANKENtanken World Leadership Summit" with former US President Barack Obama In April, GEDANKENtanken and the German-Kenyan Auma Obama Foundation Sauti Kuu laid the foundations for a sustainable cooperation. Now the cooperation has been officially sealed and Dr. Stefan Frädrich, founder of GEDANKENtanken, as well as CEO and co-owner Alexander Müller traveled to Kenya to get a first-hand impression of the foundation's work. The delegation was accompanied, among others, by Daniel Aminati. The presenter and musician ("taff", ProSieben) composed the song "Jetzt" especially for the foundation's public relations work and presented it live at the finale of the big GEDANKENtanken SPEECHES in November in front of 15,000 people in the sold-out LANXESS arena in Cologne. The song will be launched on 13 December - all proceeds generated from it will be donated to the Auma Obama Foundation Sauti Kuu. Daniel Aminati emphasizes: "It is a great pleasure and honor for me to support this project together with GEDANKENtanken." Sauti Kuu supports children and young people in Kenya in finding ways and creating structures that enable them to become psychologically, socially and financially independent. self-determined life ...to help you.

"The collaboration with the Auma Obama Foundation Sauti Kuu is a real project of the heart for us," said GEDANKENtanken CEO Alexander MüllerAfter all, GEDANKENtanken is primarily about helping people to develop their own potential in a self-confident and self-determined way, and thus helping them to lead happy, fulfilled lives. The Auma Obama Foundation Sauti Kuu conveys exactly this goal and this conviction in Kenya. That's why it quickly became clear to us: we have to pull together to make our vision of self-actualization possible for everyone internationally." In Africa, he says, they were able to directly experience how Sauti Kuu positively changes people's outlook on life and opens up sustainable perspectives for young people. "Some of our best coaches have trained new coaches in Kenya. These in turn will in future impart the necessary knowledge to children and young people there so that they can stand on their own two feet in their country with their families and develop good long-term and sustainable prospects for their existence."

In addition to the income from Daniel Aminatis Song, ten euros from every ticket sold for the big GEDANKENtanken Festival 2021 in Cologne will go to Sauti Kuu. GEDANKENtanken is also calling for donations through other channels and is also making a contribution itself. "The entire sum will then go directly to the children and young people who need our help to find real prospects in their country," emphasises Alexander Müller. The money is intended to provide as many Kenyan children as possible with complete school equipment. In addition, for example, the expenses for school fees, school meals, sports equipment or the financing of a college education for particularly gifted children are made possible. In addition, young people learn about their rights in their country and how to claim them in events specially tailored to them. In addition, there are workshops where families learn how to use their agricultural resources sustainably in order to be able to finance themselves.

The name of Dr. Auma Obamas Foundation, "Sauti Kuu," is Kiswahili and means "Strong Voices" in German. Accordingly, the organization has set itself the goal of giving children and young people around the world in particular a strong voice by concretely involving young people in the discussion of future issues and the shaping of their own future. The aim of the Auma Obama Foundation Sauti Kuu is to make children and young people from socially disadvantaged families aware of the strength of their own voice and their own potential. This includes various workshops in which their social and personal skills be strengthened so that they are able to build their own existence as self-confident young adults.

The Germanist and Sociologist, Dr. Auma Obama has already carried out projects with young people in Germany in addition to her commitment in Kenya. In addition to her commitment to her foundation, she is also active as a member of the World Future Council, which campaigns worldwide for responsible, sustainable thinking and action for the benefit of future generations. She was also a member of the board of trustees of the "Stiftung Lesen" (Reading Foundation) and the advisory board of the Academy for African Studies at the University of Bayreuth for many years. The speaker is the half-sister of the former US president Barack Obama.

Since 2012, the company GEDANKENtanken has been following a mission: Their goal is to revolutionize the world of personal and professional development. In different formats, experts, trainers and coaches create a motivating environment both online and offline and convey relevant content that supports people, for example as self-employed and entrepreneurs, but also very personally to develop their own potential.

In 2019, GEDANKENtanken was named Germany's best employer by Great Place to Work. The company from Alexander Müller and Dr. Stefan Frädrich now employs just under 100 people, whose Satisfaction is one of the central building blocks of the corporate culture.

GEDANKENtanken next wants to answer the question of how people can be optimally supported in everyday life as a digital companion in order to develop personally and lead a successful, happy and fulfilled life. GEDANKENtanken wants its app to be on the home screen of every smartphone.