Multitasking in the workplace: useful or destructive? 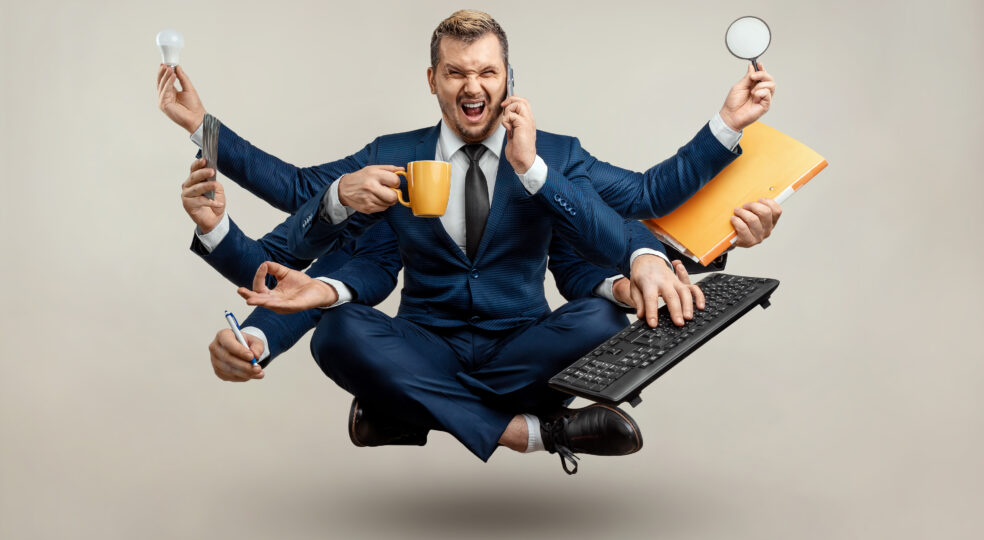 Nowadays, everything has to go fast - especially on the job. The idea of trying to complete several tasks at the same time in order to save time is therefore an obvious one. But the attempt does not always lead to the desired result. Scientists even disagree about whether the human brain is capable of multitasking at all.

In the following article, we will take a detailed look at what is actually meant by multitasking and what advantages and disadvantages this not entirely uncontroversial working method brings with it.

Before we look at the advantages and disadvantages, it is useful to first define the term "multitasking". Translated from English, "multitask" means something like "multiple task". The German term, however, which is rarely used, is Mehrfachaufgabeperformanz.

This description clearly sums up what is important in multitasking: two or more work tasks are performed in parallel (simultaneously). Here, it is important that the tasks pursue different goals. The end results are completely independent of each other. If the tasks are interrelated, we do not speak of multitasking, but of a complex action.

Example of a complex action

Strictly speaking, the process of driving a car can be divided into several processes: You have to steer, operate the clutch, accelerate, brake and observe the traffic all at the same time. However, all actions pursue the same result: You want to reach your destination safely and without an accident. Driving a car therefore belongs to the spectrum of complex actions.

You are making a phone call and cleaning your apartment at the same time. These two actions, listening and cleaning, have nothing to do with each other. This is therefore multitasking.

By the way: Multitasking is also when you are constantly switching between two or more activities at work, or performing multiple tasks in quick succession.

Examples of multitasking at work

This article is mainly about multitasking in professional life. Therefore, we have summarized five typical examples from the professional field:

You may have figured it out by now: The most common (and not particularly purposeful) multitasking combination at work is writing and talking on the phone at the same time.

Is multitasking a good thing?

Mastering multitasking is usually considered a positive quality. After all, in this way one masters many tasks within a short time. However, this very one-sided view ignores essential aspects. For example, it could be proven that the Error rate significantly increased when multitasking:

Basically, it seems quite logical: If you do several things at the same time, you can no longer concentrate as well on the individual task. However, this statement cannot be generalized. The extent to which multitasking affects the error rate essentially depends on which areas of the brain need to be active to handle the tasks.

At first glance, this sounds more complex than it actually is. For example, it is quite straightforward to listen to someone and process visual information at the same time (e.g., during a lecture). Speaking activities different brain areas on, multitasking is possible. However, the individual case decides whether it makes sense.

It gets more complicated when you have multiple make decisions should: Let's assume you are in the process of making an appointment by phone and at the same time a colleague asks you by e-mail what deadlines apply to the new order. Since the same neuronal areas are active here, there is a risk that you will get bogged down if you address both concerns at the same time.

Multitasking is considered controversial, but it does have some advantages. Especially when it comes to easy routine tasks that have already become second nature to you, it's a good idea to do something else at the same time. Sometimes it's the only way to do this in a hectic office environment.

Used correctly, multitasking gets you:

The disadvantages clearly outweigh the advantages. This is mainly because there are very few workflows where multitasking actually works. Unless it's the simplest routine tasks, it's more advisable to focus on one thing at a time.

Let's take a closer look at the detrimental effects of multitasking:

1. you save none Time

If you think you can save time by multitasking, you're wrong in most cases. In fact, it often takes you longer to complete your tasks. After all, when multitasking, you have to constantly interrupt your current activity in favor of another one and get back into it afterwards.

Constantly shifting your focus to a new task means maximum effort for your brain. No wonder that after a while you make more and more mistakes. Your productivity also decreases. It is a misconception that when you multitask you get twice as much done. In fact, the opposite is often true.

Multitasking puts you under enormous psychological pressure. It's not possible to constantly complete tasks in parallel and not make any mistakes. The human brain is simply not designed for this. If you still demand this perfection from yourself, it can lead to psychological and physical illnesses in the long run.

Have you ever tried reading a book while watching TV? You probably won't get too much out of the movie (or the book). It's a similar story with multitasking at work. When you're being taught new content, you should focus your attention fully.

5. you endanger yourself and others

Depending on the industry you work in, multitasking can even be dangerous in extreme cases. Let's assume you work in the control center of a transportation company and accidentally give out the wrong signal because you're busy doing a lot of other things at the same time. You certainly don't want to live with the possible consequences.

Effects of multitasking on health

The adverse health effects can sometimes be so severe that we want to address this aspect separately. Women in particular are often expected to be able to multitask. An expectation that is completely unrealistic.

Multitasking often involves trying to please everyone. In the process, one's own well-being falls by the wayside. Errors due to Overload are pre-programmed. If someone then complains about the allegedly inadequate way of working, this can be very frustrating.

A vicious circle is created: multitasking leads to chronic overload. Chronic overload, in turn, has been shown to lead to mental illnesses such as burnout or depression. This is what emerges from the scientific elaboration.

Important to know: If the soul suffers, the body is also affected. There is a risk of psychosomatic complaints such as headaches and back pain.

8 tips on how to break the multitasking habit

The best way to deal with multitasking is to break the habit. Your productivity and health will thank you. Sometimes, however, it's not so easy to consistently dedicate yourself to just one task at a time. This is especially true if you've been multitasking for years. The following suggestions can help you change your behavior patterns:

Especially when it comes to boring tasks, we tend to get distracted. Whether it's a glance at the cell phone or a short private Internet search. Afterwards, however, you find it even more difficult to focus again. In the end, you need even longer for the unloved task.

Therefore: Eliminate all sources of interference. Put your smartphone out of reach, turn off the radio and, if possible, switch your office phone. If you work from home, ask your family to be considerate and not disturb you.

If you find it very difficult to concentrate, it can help to first set a moderate time window. It's best to start with 15 minutes in which you work on a task with complete focus. Then take a break. Set an alarm clock for this. Now increase your time window by about 5 minutes every week until you can finally work with concentration for an hour.

By planning exactly when you do what, you won't be tempted to do several things at once. Important: Plan time idle in your working day, which you can use for the completion of spontaneous tasks.

A colleague asks you to just on the side a few little things to do? Have the courage to decline in a friendly manner if you feel overwhelmed. Stopping multitasking means, above all, being responsible for your own Needs to take responsibility.

You may not initially feel comfortable working through tasks one at a time rather than in parallel. Regular Mindfulness exercises can help you to ground yourself. How about a morning meditation, for example, to start the day already relaxed?

Do you feel in between overwhelmedbreathing exercises can help. Breathe deeply into your belly and imagine how the stress flows out and new energy flows into your body.

6. if multitasking at all, then with routine tasks

While the copier is running, you can easily file or put on a coffee. When doing routine tasks, the error rate is low, even if you do them in parallel.

7. keep order at your workplace

Disorder leads to the fact that you must interrupt your current activity again and again, e.g., in order to look for mislaid documents. This can be avoided by ensuring that everything is in order from the outset.

8. do not put yourself under pressure

Every change takes time. Cut yourself some slack if you can't implement the above tips right away and find yourself multitasking every now and then. It's a learning process that works best if you remain patient. Don't get discouraged.

In most cases, multitasking at work does more harm than good. Added to this are the risks to mental and physical health, which should not be underestimated. Many companies (and employees) have already recognized this and therefore rely on singletasking.

Doing just one task at a time makes you more focused and productive. Errors of carelessness can be minimized. Always remember: You only have two hands. Get away from the idea of working like a computer.