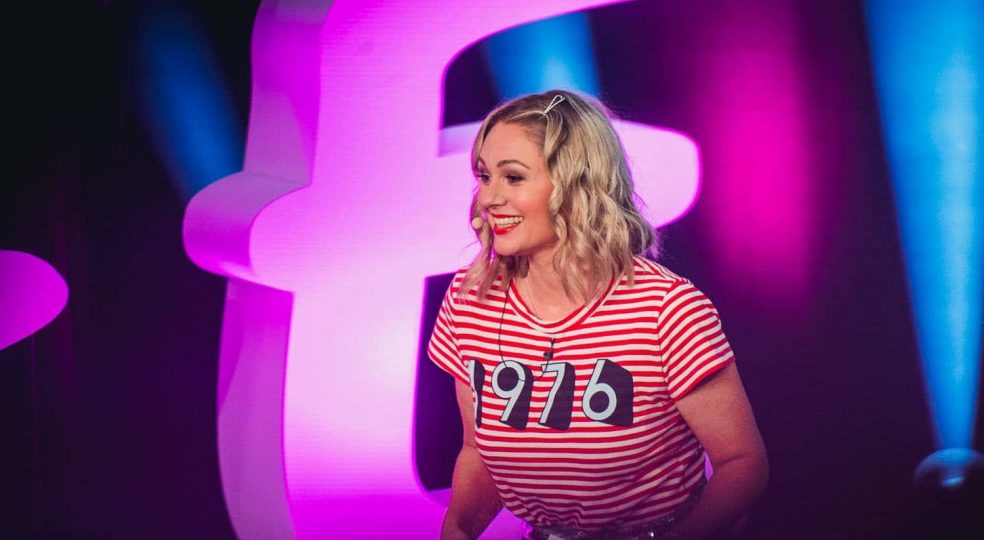 "It's really something completely different for me to be standing here on this stage. Even though I've hosted so many big shows," Ruth Moschner (44) outed herself right at the beginning of her appearance at the Speaker's Night at the Volksbühne am Rudolfplatz in Cologne. "Exactly for these moments, when I get nervous, I have a little tip: breathing helps!" In addition to her vocation as a moderator and Author Ruth Moschner also has another one: "I am a qualified holistic nutrition and health consultant as well as a micronutrient coach! And on the subject of nutrition, the speaker has a lot to tell.

Ruth Moschner: "Everyone is selling themselves as a nutrition expert!"

"After all, there's only one thing more unpopular than having dinner with a nutritionist," the TV star knows. "That's having sex with a plastic surgeon. You know what he and a nutrition coach have in common? You get your rocks off with both of them!" jokes Ruth.

Not to mention that: She finds that the topic of nutrition has become increasingly complicated in our society. "I don't know where to eat, what's good for me - everyone sells themselves as an expert on the subject. Every week I'm inundated with new, nicely-intentioned tips. I feel like everyone is just looking at each other's plates. Food is our new religion. Divided into the faiths:

If you subtract the water content in the brain, that's 60% fat. Did you know that? "That's only 15% more than mountain cheese has," adds Ruth Moschner. "Imagine the thinking power of cheese - now you know! This can't be working."

"Nutrition is a complicated subject - listen to your gut!"

At the same time, the Munich native also reveals that she has tried dozens of diets. And they all work - as far as marketing is concerned! "So, keep your hands off it!" is Ruth Moschner's urgent advice. "The whole subject Nutrition is much more complicated and individual. You have to learn to listen to your gut. That's not so easy when the voices of industry, advertising and the environment are much louder."

Ruth Moschner's childhood was shaped by a false image of nutrition

Ruth Moschner's "food picture" was also created in her early childhood. "At home, food was always served with the exact number of calories, plus the time indication of how long the calories would stay on my hips in the form of fat. For practicing triplets, that's great. But not for personal development," is her conclusion.

Ruth describes herself as one of the "too-women": "To my ballet teacher I was Sync and corrections by n17t01 fat - so I went on my first diet. At the same time I was at school a lot Sync and corrections by n17t01 thin. At that time, the adults often said: 'Ruth, you'll never get a feminine figure'. Until my cleavage was more present than the rest of my body," she says today, taking the statements with humor.

Ruth Moschner on nutrition and the film industry

In the film industry, a birthing pelvis is like climate change, says Ruth Moschner: "Everyone knows about it, but everything is done to conceal the problem. So that no one notices. The only essence that many draw from it is: The way you are, you're not okay. You need to change."

No matter in which phase the TV presenter was with her body - it always hailed criticism. Her biggest critic, she says, was herself. "Because I became more and more receptive to the comments and felt more and more insecure. I was beating myself up. There was no gut feeling anymore."

We women in particular - especially when it comes to nutrition - always tell ourselves: "If I weigh three to five kilograms less, then everything in my life will run like clockwork". But Ruth Moschner knows better: "Then everything starts all over again. Because the inner self-dismantling fuzz is still there. And it immediately whispers a new problem spot into our ears. Who determines how you have to be anyway? An evaluation is always subjective."

Ruth Moschner: "Grow from the steps in your life!"

"It's your life story, and you shouldn't let anyone else talk you into it. Go your own way. I would like to tell you two examples from my life:

And now I am standing here and giving a lecture in front of you! Often when we are stuck in a situation that doesn't suit us, we want to leave really quickly. The trick is, you get to accept the new challenge. Then, step by step, you move toward your goal. Often this movement is much more important than the goal itself. Because you can grow from your steps!"

Learn to love your body unconditionally

Of course, even Ruth Moschner still has phases these days when she would like to break the lease with herself... "But I know that I can make a new decision in every situation. And I work on that every day!" She said she learned quite a few important things during her studies. But one thing helped her personally a lot: "I realized how much my body supports me every day. This little guy right here supports me and keeps everything going. To me, that's unconditional love. Our bodies do everything they can to keep us moving. That's why you should judge or condemn yourself even less."

Ruth's mission statement is, "Your body is your best friend!" Her message is clear: "Take care of yourself!" And she's straightforward about what that can look like, too.

Listen to your gut and find yourself!