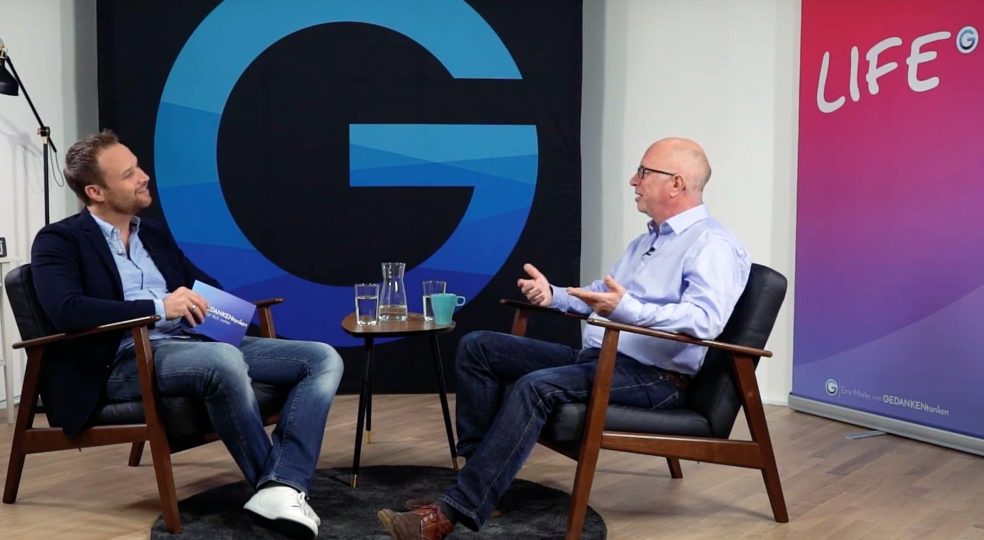 Robert Betz has been involved in coaching and psychology for over 20 years. The experienced expert has sold hundreds of thousands of books and countless CDs. Tens of thousands of people have attended his seminars. But what drives the successful entrepreneur? What motivates him? And how did he get into his business in the first place? In the interview with Alexander Müller talks Robert Betz about his own personal success story and says, "I can't imagine a more beautiful profession!" Have fun reading or watching!

The success story of Robert Betz

Anyone who has seen him live on stage or in a seminar can confirm that Robert Betz is very passionate about his work. The secret of his success? "It's fun for me and obviously brings a lot to people. It's nice to look others in the eye and see that they have changed their lives for the better. That is always touching. I can't imagine a more beautiful profession than mine."

But how did the psychologist become a successful entrepreneur and keynote speaker? Where do his roots lie? Robert Betz: "I originally come from a Catholic family in the Rhineland, where people liked to judge others. That is something typically Catholic, Rhineland. Everyone who was different and thought differently was simply called crazy or stupid. That was part of my upbringing."

At the age of ten, Robert Betz attended a Catholic monastic boarding school. At that time he could well imagine becoming a priest. "The time at boarding school was very formative. I realized then that I could be content without my parents. I wasn't homesick." Later, the youngest of five siblings transferred to grammar school: "I never had any inhibitions about saying anything - not even to the teacher. I had a certain self-confidence relatively early on. My classmates recognized that and elected me class president."

However, Robert Betz was not a class clown. In the interview, he says, "I have a Rhenish sense of humor and love to laugh. Even as a child, I loved to party with my family." His family shaped him, but as the youngest in the bunch, he wanted to do many things differently than his older siblings: "I always moved around the world. Hamburg, Frankfurt, Düsseldorf, Munich, Lindau, Lake Constance ... That was fun." Early on, Robert Betz decided against having children of his own: "I had myself sterilized at the age of 25, and quite consciously. That was during the time when progressive men were having themselves sterilized. I think that all influenced me to take a different path."

But let's take another look back at his childhood. In his seminars, Robert Betz talks about children developing strategies early on: "The basic need of every child is the need or the search for maximum attention. You can call that love, appreciation, recognition or praise - every child needs attention."

Parents can give their children this attention to a greater or lesser extent. Robert Betz: "A child wants emotional security, physical touch, mental interest - and of course children are financially dependent. So, to be physically and socially viable, the child needs feedback. It wants to be seen, acknowledged, and affirmed."

What strategy did Robert Betz develop as a child? In the interview he says: "First of all, be good, nice and pious. That was my world in the Catholic Church. Also, I went for achievement. Those are the main strategies that everyone develops. Being good, being nice, being quiet, being low-maintenance, helping parents and earning approval. That's how you feel you have a reason to exist."

Robert Betz studied psychology in Hamburg: "In my undergraduate studies I studied social pedagogy and did a lot of politics or social work. Afterwards, that changed, because I wanted to get a decent degree, of course. In the semester breaks he prepared seminars for his professor: "Those were great seminars, which I also helped to lead." Head boy, apprentice representative, student council - Robert Betz has always been very active and committed.

Despite his studies, Robert Betz never practiced psychology after graduation. Instead, he went into business early on: "That was a very conscious decision. I had the best degree, but my gut said no. The state of psychology to this day is not such that it can help with very normal things." Despite a job at a university hospital on the horizon after graduation, he decided to work for a PR agency, "As a young person, you want to explore what you're made of first. And then you look for something fun. And I couldn't imagine something as boring as the job at the university hospital."

So it was off to the PR agency for Robert Betz. He quickly became very successful in the communications field and a few years later headed the European marketing department of a large corporation. What made him so successful back then? In the interview he reveals: "I was able to bring in my different talents and made sure that everyone was happy. It was always very important to me that everyone felt comfortable."

Even today, Robert Betz attaches great importance to the quality of his seminars. He is only satisfied when the participants are enthusiastic - not only about the content, but also about the surroundings: "That is important to me! If people want to do something for themselves, then the whole ambience has to be right."

Are you ready to follow your calling and help people...
professional help?
Register now for free