Indifference: How to find your way out of passivity 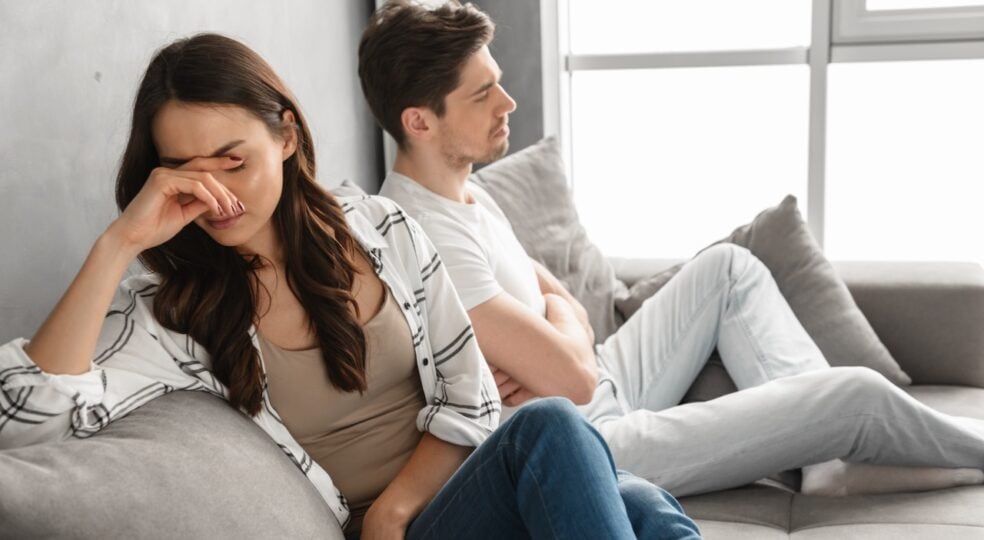 Indifference is a behavior described as disinterest. A person is indifferent when he or she does not care about the feelings and opinions of others. A person who is not interested in his tasks and acts unmotivated on the job is considered indifferent.

However, indifference cannot be reduced to the absence of emotions. Indifferent behavior has many different causes. It is not always a negative or antisocial character. Indifference can also be self-protection. In some situations it is quite appropriate to show indifference in order to distance oneself.

What does indifferent behavior have to do with passivity? Are you often in an indifferent mood? How do you deal with indifference? Why do people often react indifferently?

In the literal sense, indifference means as much as disinterest, dispassion or passivity. Indifferent does not mean to evaluate something negatively. Often there is no absence of feelings. People who give the impression of being indifferent may not be able to feel their emotions not show so well.

The term indifference is associated with indifference (disinterest). Indifferent people perceive things or events without evaluating or commenting on them. They behave passively. There are many different reasons for this.

Is indifference psychology or tactics? In sciences such as psychology and psychiatry, indifferent behavior is often observed in connection with mental illness. Indifference may even occur as a concomitant during the use of certain drugs. Prolonged use of psychotropic substances favors indifference and its intensifying form, stupor.

In relationships, indifference is seen as callousness. However, this designation is inaccurate. Emotionally cold people are not able to express their emotions. Indifferent behavior has other causes. Other synonyms for indifference are equanimity or composure.

Equanimity is an inner attitude that helps maintain composure in difficult situations. Serenity is considered a philosophical virtue. It is a form of prudence that makes it possible not to get upset about trivial things.

How does indifference manifest itself?

With indifference, a distinction is made between different types.

Indifferent behavior can be manifested by:

express themselves. A situation characterized by indifference and Disinterest This kind of behavior can have a negative impact both professionally and privately. If you react indifferently on the job, you will not be considered when interesting projects are assigned. Your career will stagnate if tasks are completed without motivation.

Detachment is perceived as a visible sign of indifference. Lack of social skills are a major reason for failure in important Appointments, interviews and meetings.

Lack of empathy means having little interest in the Needs of others. Often, this form of indifference manifests itself in an unwillingness to take an interest in the problems in the team or in the family. People without empathy use their elbows to get ahead while being indifferent to the feelings of their fellow man.

Lack of helpfulness suggests a high degree of indifference. Anyone who is not willing to support is unlikely to be a team player. In the workplace, indifferent behavior often manifests itself in a lack of motivation. Although not every task is exciting or demanding, commitment is still expected on the job.

Disinterest is a form of indifference. Through lack of interest The motivation decreases. Finding new perspectives is often the only option to break this vicious circle.

Why are people indifferent? What triggers indifference in you? Indifferent behavior can have different reasons. What makes us indifferent depends on our values, life experiences and certain circumstances.

Sometimes indifference is a trait or an acquired behavior. People who received little attention in their childhood, but were treated indifferently, also tend toward this behavior in adulthood.

Disinterest or aloofness is a particular form of indifference that can be caused by mental disorders. A depression, a Burnout, fear or a phobia can make indifferent. Severe exhaustion is a major cause of indifferent behavior. What makes a person indifferent?

The main reasons are:

Mental overload favors an indifferent behavior. The purpose behind this is self-protection. People who are afraid of being hurt by their partner through infidelity want to protect themselves through disinterest. They deliberately avoid conversations or arguments so that they do not have to deal with the Cheating confronted. Problems are no longer addressed or only superficially.

At work, indifferent behavior is due to frustration on the job, lack of team cohesion, and poor working atmosphere. Do you feel unfairly treated at work? Are your achievements not sufficiently appreciated? Were you passed over for a promotion? Indifference is often a reaction to a management style that is perceived as unfair.

An Conflict situation always presents a challenge. Those who cannot deal with conflict, who feel weak and helpless, often react indifferently. In this state, we don't care about anything. Indifferent behavior helps us not to perceive things that could burden us or get us into trouble. We close ourselves off.

Indifference often appears as Accompanying fear of loss or grief on. The worry of losing your partner to an affair can make you angry, but also indifferent. Depending on the state of mind, people react very differently. While some want to solve their problems in a relationship conflict by arguing, others retreat into the shelter of indifference.

In truth, however, no one is indifferent. Everyone has feelings, however, we are not always able or willing to show our emotions.

The self-protective function of indifferent behavior becomes particularly clear after a Trauma. Traumas are exceptional psychological situations. They occur when events such as domestic violence, experiences with war and terrorism, accidents with life-threatening consequences leave deep psychological wounds. Indifference is then a way of blocking out the catastrophe and leaving the Trauma easier to overcome.

An indifferent behavior can also be achieved by general Life Insecurity explain. When life goals are missing and one's life task is not recognized, insecurity and indifference make themselves felt. An indifferent person hardly has an opinion of his own. The thinking is neither positive nor negative.

Indifference due to low self-esteem

Deliberate indifference can be reinforced by low self-esteem. People with low self-respect feel inferior to others and react indifferently. Interpersonal contacts are reduced in order to avoid discussions or arguments. Those affected are convinced that they have no influence on their lives. Through indifferent behavior, they suggest indifference while hiding the emotions within.

Sensory overload makes people indifferent. Everyday life in our modern society is dominated by news of wars, government crises, earthquakes, Climate Change and other disasters determined. The media constantly report on problematic issues. Positive things, on the other hand, are hardly mentioned. The multitude of negative events can lead to people being overwhelmed, becoming numb and indifferent.

It helps against this form of indifference to occupy yourself with pleasant things. If you can look forward to pleasant events, such as a romantic dinner for two, coffee with your best friend or a weekend trip together, you will no longer react indifferently to unpleasant news.

Indifference on a social and private level

What is the significance of indifferent behavior on a social and private level? Interpersonal Relationships are largely emotional. We look around for a partner who suits us. Friendships also develop under the aspect of similar interests or hobbies.

In the course of the Time a love relationship loses its appeal. Everyday routine takes over. You no longer look at your partner through the rose-colored glasses of infatuation. Disillusionment is often followed by indifference. If one of the two cheats, the other reacts indifferently.

Can indifference save relationship?

Disappointed love is a common cause of inner distance. Can indifference save relationship? This is hardly possible. With a Relationship crisis communication is an essential factor. At best, you can resolve disagreements and misunderstandings in a honest Conversation.

Indifference after a breakup is a self-protective measure. Many people find it difficult to cope with the end of a relationship. In order to avoid further Disappointments to spare, many people react indifferently. This avoids thinking about problems. People don't want to admit to themselves that the partnership might have been salvageable after all.

The inner emptiness and indifference usually occurs as a result of deep grief. After the loss of a loved one, it is difficult to find one's way back into life. Indifference is part of coping with grief. It helps to get distance and to shape the future without the deceased person.

Indifference due to crises

An ethical crisis can result in indifferent behavior. Have you worked hard for something and then been disappointed? How did that feel? In this case, indifference is a kind of tool to protect you from further disappointment.

The meaning of life has a different meaning for each person. A crisis of meaning arises when the desired goal cannot be achieved or a life plan cannot be realized. When fate thwarts our life plans, everything seems meaningless and we react with indifference.

Indifferent behavior can also be a sign of spiritual awakening. Everyone strives for something higher. As soon as the phase of despondency is overcome, many people occupy themselves with spiritual questions. Everyday and banal things now seem indifferent. We focus on the higher questions of life.

Advantages and disadvantages of indifference

In psychology, indifference is described as a reaction to psychological problems, personal and existential crises. Indifferent behavior can thus certainly have some advantages. In the long run, however, an indifferent attitude to the world has exactly the opposite effect.

Advantages of indifference are:

Indifferent behavior has many disadvantages. These are:

Temporary indifference can be useful to protect oneself from excessive demands and too much stress. For interpersonal relationships, indifferent behavior means a considerable strain. Professionally and privately, indifference leads to isolation. Loneliness and exclusion can additionally make people indifferent.

Is there an optimal approach? Moderate indifference promotes respect and tolerance. Meet your fellow human beings in everyday life with interest. Withdraw if you feel that you are being treated unfairly or that everything is too much for you. Moderate indifference is perceived as coolness.

What can you do about indifference?

Indifference as self-protection has an important function. Indifferent behavior for no apparent reason, on the other hand, indicates an egocentric personality. What can you do against indifference? Find your goal in life, get involved at work and motivate your co-workers.

Work on your relationships. Society depends on social behavior. If you are pretty much indifferent to everything, you will hardly any success professionally have. A partnership thrives on affection and mutual interest. With indifferent behavior you block the chance to get to know others and to make new friends. Making friends.

Stay calm, but speak your mind and stand by it. Commit to your goals. Getting active is the best way to overcome indifference!

You have no more desire to argue? In this masterclass you will get concrete tips and recommendations on how to resolve any dispute peacefully and sustainably.
Register now for free
Reviewed by Dr. med. Stefan Frädrich